Wilson’s Restaurant and Jazz Lounge is coming to Hi-Nella New Jersey, taking over the legendary building that in the past has housed Richeez’s, Hi-Nella Inn, Balloons and Duke’s!   The new owners hail from Gloucester County, and are doing a complete remodel of the building to bring the New Orleans experience to South Jersey… targeting a May opening!

The specific address is 709 S Warwick Rd, in Hi-Nella next to Sterling High School. 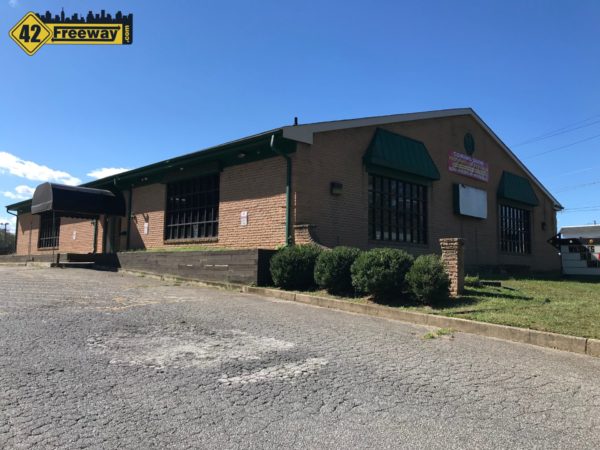 42Freeway has been keeping an eye on the new Wilson’s Restaurant and Lounge since the Fall of 2019 when we first noticed the banner on the building.  Of course timing is everything, and soon after Covid took over and I am sure that delayed the forward progress on the remodel through 2020.   But things are moving fast now!

They are actively posting construction updates and other interesting New Orleans and Jazz tidbits at their Facebook page.  It sits at 214 “likes” right now, so if there is one thing you get from this post… go like their page!

looking to bring a first class restaurant and lounge to the South Jersey area. At Wilson’s, you will experience delicious New Orleans cuisine with true Southern hospitality accompanied by the best live Jazz, Blues and R&B bands, not to mention comedy and open mic nights, on our center stage. We will also feature some of the areas best musicians to showcase their talents.

The Wilson’s building is deceptively large.  I mean, it’s a good sized building… but inside feels even bigger.  Well at least from what I remember at 4:30am in 1989!  Ha!

And the Wilson’s will be using some of that space as a private party room suitable for 50 guests; available for groups, business meetings and private parties… or even special Wilson Lounge hosted events.

All told.. they will be able to accommodate 200+ people at Wilsons!

From their Social Media posts it’s clear to see this is not just a “dust off and turn on the lights” upgrade… they are doing a full interior remodel… taking all of the interior walls down to the bare studs and rebuilding from there!  They are even rebuilding the bars!   (well to be clear, I don’t know how many bars will be inside but I see they are rebuilding at least one.. or two?) 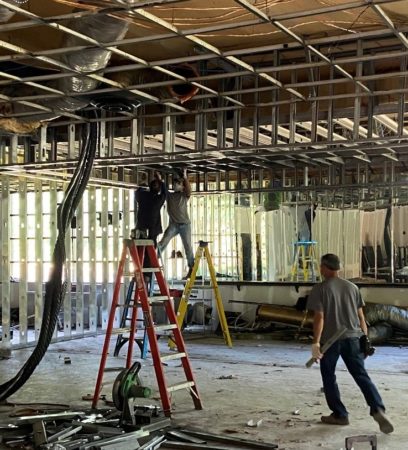 The Wilson’s are also doing a great job with their Facebook page, blending in interesting information about New Orleans culture, jazz, and the new Wilson’s Jazz Lounge.

(Side Note:  It frustrates me to see a business that has a Facebook page that is not updated for 5 years!  If you put good information up, great photos of your food and drink.. people will respond!  But I digress!  Excellent job Wilson’s! )

In the posts are tid-bits of what Wilson’s will be all about.

We learn about Gumbo: It is a dinner in itself, being soup, piece de résistance, entremet and vegetable in one

We learn that they will have live music:   Are you missing live music? We are, too!  Get ready to swing, sway and sing along!  …will feature live music with state-of-the-art sound, luxe accommodations, and the best jazz, blues, and R&B bands.

We learn more about the artists they will be featuring:  Ella Fitzgerald was the most popular female jazz singer in the United States for more than half a century. She won 13 Grammy awards and sold over 40 million albums. Her voice was flexible, wide-ranging, accurate and ageless

More interesting New Orleans food options!  A “muffaletta?”: How about a muffaletta? A muffuletta is a famous Italian sandwich invented in New Orleans with cured meats (ham and salami), provolone cheese, olive dressing, and great bread. The olive dressing sports chopped green and black olives with onions and olive oil and spices, and the bread is a round sesame-seed roll big enough for sharing

Everything has a New Orleans flare, including the cocktails : Our menu features the flavors and spirit of the Big Easy. Cocktails are handcrafted and bring the spirit of New Orleans to New Jersey

“There’s certain things in life that I love. One is architecture. And music, culture, food, people. New Orleans has all of that.”

Mame and Mark Wilson share those loves and are excited to bring the spirit of New Orleans and wonderful live Jazz and Blues to South Jersey at Wilson’s Jazz Lounge.

And the Wilsons are well aware of the legendary history of the building…asking for comments on what people remember! 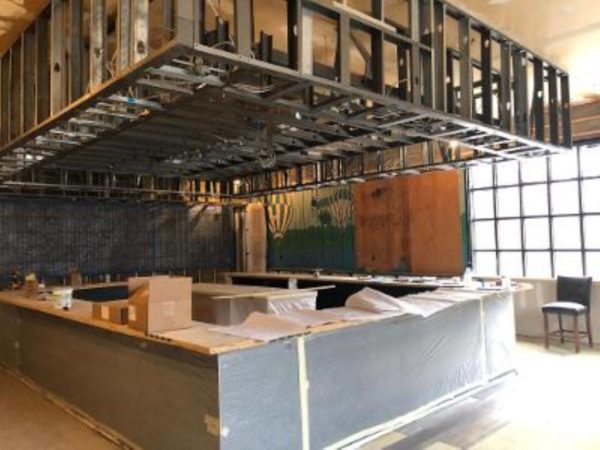 Location: Right Under Your Eyes The Whole Time

First, let’s clarify the location for you, and then we’ll come back to some of the history.   Wilson’s will be opening at 709 Warwick Rd in a building that for decades has been known as a bar & restaurant…  this is next to Sterling High School.

I wouldn’t be surprised if many people in South Jersey know of Warwick Rd an Hi-Nella, but are never really clear where they are.  Well for one thing, Hi-Nella is an official town… with only 870 residents!  That is it!  The entire town is only .22 sq miles… so at 140 acres it is smaller than the Bellmawr landfill property everyone sees on Rt 42!

And with all that in proximity… there is still probably a good chance you’ve missed Warwick Rd… well unless you frequent the Warwick Tavern “The Wick!” or remember “Duke’s Till Dawn!”

So after spending too much time telling you that this bar location is in the middle of everything, but you still may not know it is there…  why do SO many people know this building?

The Hi-Nella bar and restaurant building is most famous for having a liquor license that allowed them to be open until 5am.

So EVERYONE who went to bars in the 70s, 80s and more would start out at Dick Lee’s in Bellmawr, or Enchante in Cherry Hill, or any of the many dozens of night clubs… and when they closed at 2am, the diehards would head over for Round Two of partying at Duke’s / Balloons!

Articles from the early 80s’ say many nights Duke’s didn’t even bother to open until midnight, because the pattern of “Start somewhere else, then head to Duke’s Till Dawn” was so engrained into area club hoppers!

SO TO BE CLEAR, I don’t know the status of this 5am license for Wilson’s Jazz Lounge, or if the new owners even would want to support those long hours.  I imagine this is actually a town ordinance.. well I don’t actually know how this works.  I’ve reached out to the Wilson’s and will provide more in a future update.

A very related side-note that I have in my cue for a video…   just how different the bar & club scene is today in South Jersey and America.  Young people today (under 40) just have no idea what it was like through the late 70s, 80s and early 90s (but things were fading in the 90s).

Simply, there where clubs, bars, and discos in EVERY town basically.   All locally owned entertainment venues where young (and old) people would go out every night and…

10s of thousands or more across South Jersey.

I get that even today young people in their 20s like to go out on a Friday or Saturday night.

But today that means quietly sitting at a table with a few friends, and everyone looking at their smartphones.

But in their parent’s day…

People spent more time on their feet, dancing to the music or just standing and listening to the area’s hottest cover bands.

There were so many options for entertainment that a night out meant hopping from bar to bar.   (Yes I get that’s risky, but that’s how it was)

And remember.. there were no cell phones.  We had to make plans with close friends from the home telephone… and then hope we caught up with each other.

Because people thrived on entertainment, and dancing, and meeting new people… and many ended their nights at Duke’s Till Dawn.

Is Deptford’s Adelphia’s Restaurant and Nightclub.

I mean, the Hi-Nella location never had the lighted dance floor that Adelphia’s has… and well sure,many bars in the area offer entertainment with a band slipped into the corner… but the days of dedicated stages and dance floors are really past us.

Oh to close out this rambling trip down Mark’s memory lane…    all those national chain restaurants around the Deptford Mall, Cherry Hill Mall, Cross Keys Rd that serve alcohol?

At one time, every single one of the liquor licenses in use at those establishments were originally a locally owned tavern or club.   From small local bars like Deptford’s Krazy Kat, to much larger dance clubs such as Cherry Hill’s Franchine’s, Enchante, and the Coastline.

All those fun, dancing, listen to music places are gone… replaced by Chili’s and Applebees.

And I really hope that Wilson’s brings back some of that larger scale live entertainment vibe!

The Nearby Lawnside Legacy

One other musical history I want to call out… is that ALL genres of music and live entertainment were at another level 40 years ago… including Jazz and Blues that Wilson’s will feature.

Nearby Lawnside New Jersey was once famous on the EAST COAST as being a mecca for jazz music and barbecue!

From the 1930s to the early 70s, there was strip of clubs on East Evesham Rd near the Somerdale Walmart.

At the core of the music and food genre was the town… Lawnside is New Jersey’s oldest incorporated African-American community, and those early clubs in the 30s were started because segregation was a way of life back then, and Lawnside business persons started opening up clubs to cater to their musical and food tastes.

The article goes on to say at one time Evesham Rd offered a lake with boathouse, two swimming pools, a full amusement park with a ferris wheel… as well as hotels and restaurants!

And here we are in 2021…  the big rock clubs like Dick Lee’s (The Pennant) are gone, all the big dance clubs are gone except for Adelphia’s… and while I am not really in tune with jazz clubs… it seems that area jazz and blues clubs are also down to a bare minimum.

Which is all the more reason I am excited for the opening of Wilson’s Restaurant & Jazz Lounge in Hi-Nella.   The area needs this.