The first of two digital ad monuments approved for Route 42 in Washington Township is quickly rising on a small commercial property across from Arby’s, next to the closed Burger King.  The large signs are being developed in several South Jersey towns and primarily feature digital advertisements and town announcements, in a very attractive presentation.

The are being developed by a private business and are not taxpayer funded, but they did require zoning variance approvals which the town solidified in a resolution.

The resolution for the two signs was approved in June 2020 and call out specific rules and restrictions for what can be displayed on the signs, the hours, and even the brightness.  The town even requires the ads have no motion, no flashing… the ads can’t even fade in and out.

As part of the agreement, Washington Township can use the sign for messages… 8 seconds of every 2 minutes.

Be sure to scroll down to see architect renderings of the Washington Township signs, and photos of signs that are installed in Pennsauken!

So let’s take a step back and talk about the sign general concepts and the innovative company developing variations throughout the Delaware Valley.

Catalyst Experiential is a signage company with a unique business model for digital ad signs.  These two Washington Township signs are being developed by them, and are not tax payer funded.

Just this prior week, Pennsauken had the grand opening ceremony for a new sign on Rt 38 (which includes a large water pool feature) and another one is close to being completed on Rt 70 about a mile away!

The large monument signs are also in varying stages of development for Mt Laurel and Evesham.  Website “A View From Evesham” shares the details on the sign planned for Marlton, which yet another design!

At their core… the signs are digital billboards.

But what’s distinctive about the Catalyst Experiential signs is they are developed in a much more eye pleasing style, incorporating stone facades, water features and prominent town name identification!

And for several locations, the shape of the digital screens are not the traditional movie screen style configuration.

A traditional wide screen billboard needs a larger piece of land to both install on, but also requires a lot more buffer around them so that oncoming drivers have a clear view of the signs.  The placement of the still-to-be-developed second sign for Township will support this wider configuration.

But with a vertical configuration, like the one currently under construction next to the former Burger King in Township.. they are able to put the sign closer to the highway and in a much smaller piece of land.

The sign across from Arby’s (next to the closed Burger King) is being developed with the vertical aspect ratio.  Incidentally the Burger King property is planned to be redeveloped as a Mod Car Wash.

On the other side of the new monument sign is the u-turn turnaround loop.

The monument sign will be two sided, for visibility to traffic traveling both directions of Route 42.

Renderings provided to the township show the sign will be a somewhat modern design, in comparison to the two in Pennsauken which have a more rustic “woodsy” feel.

On the Washington Township sign, the town name will be featured across the top, in 1.5 foot tall letters.

The vertical support columns and lower base are covered in a stone façade.

And a waterfall feature will run along the inside edge!

This use of water seems to be different than what I saw with the Rt 38 sign which had a very large pool.

Landscaping and flowers form an attractive base.

The Washington Township seal is also a prominent feature!

We haven’t talked at all yet about the location of the second monument sign! 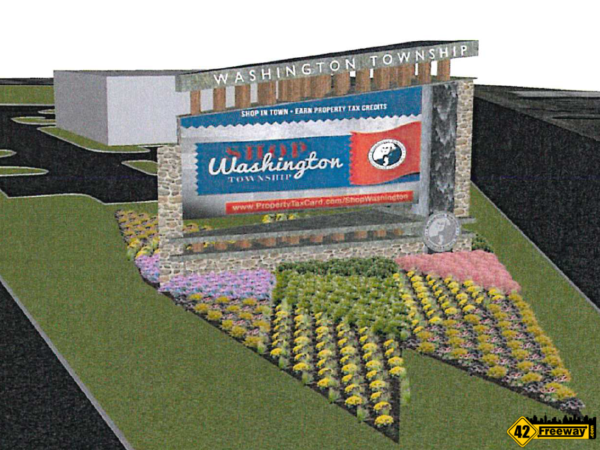 The other sign will be further South at the Tuckahoe Rd intersection, directly next to the new Panda Express / Jersey Mike’s Building.  The second monument ad sign will take the place of the Gulf gas station located at the point!

This second sign will have a matching style to the other one, except it will be a wider configuration… more similar to a traditional billboard display, and of course with all of the attractive monument design elements.

This larger monument sign will be will be 41 wide and 19 feet tall.

It will also be two-sided, in triangular shape.. so that drivers on both directions of Route 42 can see the digital displays.

I referenced this more than once as a “movie theater” style configuration.  With it’s placement at the Tuckahoe road traffic light intersection it would seem the cars sitting at the Southbound red signal will feel like they are at a drive-in movie theater!

As mentioned, Catalyst Experiential is making monument sign deals with a variety of Delaware Valley townships.

On Route 38 they just last week had the ribbon cutting ceremony, and a mile away on Rt 70 a second sign is close to being completed (but the digital display is running).

To be clear… the displays are beautiful and yes they look wonky in my photos.. that is just how an iPhone takes photos of digital displays.  Trust me, they are beautiful screens.

The Route 38 sign is fully functioning, and as mentioned has a more woodsy style with grass growing in the sign, large boulders in the base and the pond..  oh yea, this sign features a VERY large pond!   To be clear, it doesn’t appear that the township signs will have ponds 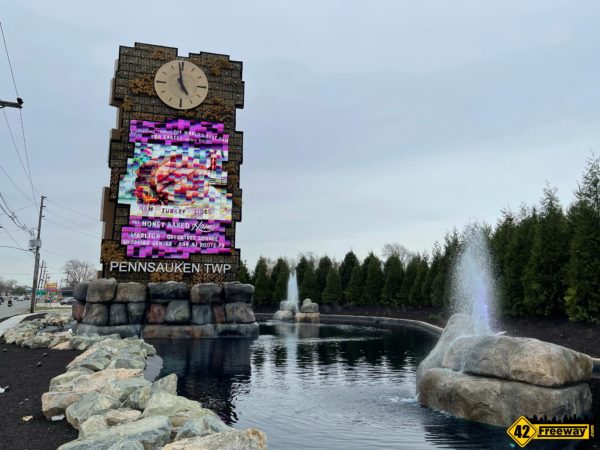 The Route 70 Monument Sign is also in Pennsauken, and is mostly complete.  It appears that it will also feature a water/pond feature with boulders once completed. 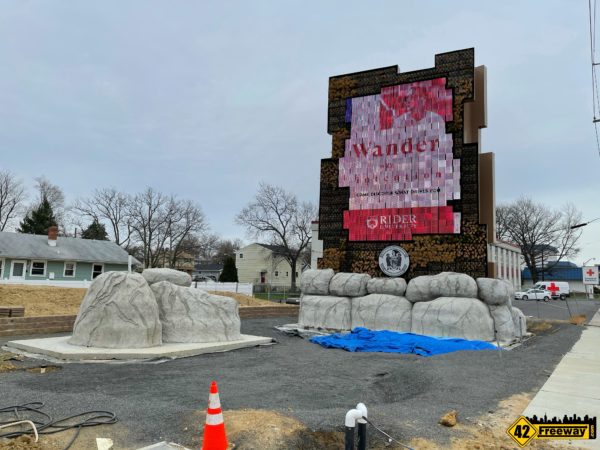