A new virtual gaming center is opening in just a few weeks in Washington Township!  Excalibur VR will bring the latest Virtual Reality gaming fun to the Washington Center Shoppes, where Acme, Chipotle, Bistro DiMarino and more are located on Egg Harbor Road!  They are targeting a May 7th Grand Opening.

We don’t know a lot about the specific background of Excalibur VR, but we do see their signage is up at the location, the interior work looks ready, and their website is online.

And Mark has tried Virtual Reality several times at other facilities.

If you aren’t familiar with VR gaming… it’s where you are immersed into the game world!

Instead of looking at a traditional screen… you wear goggle headsets which have screens embedded in them.

Motion sensors in the headsets send signals to the video software to change the image in synch with your head movements.

So the headset covers your entire “field of view” with a digital image.   It could be as simple as a nice landscape scene with mountains in the background.

And the motion sensors detect how you move your head and body… so that if you turn your head left, for example.. the image in the goggles adjusts to show the image as you turn.

Very quickly it creates a real illusion that you are in the gaming world!

There are also hand controllers with somewhat traditional buttons, but they also have motion sensor.

Now the game knows where your hands are positioned.   When you are using a sword in the game, you are actually swinging your hands and seeing it in game!

For those who are with you at the VR Center… they are watching you play, and with the monitors in your space they can see what you are seeing!

How real is the effect?  Well in one VR game “Richie’s Plank Experience“, the user is simply taken to the top of an tall building via an elevator.

The elevator doors open and the path leads to a plank.

A plank hanging off the top of the building.

What you see is the exact visual perspective of standing on top of the building.

And this FREAKS OUT a significant number of players.

So then you are asked to walk out on the plank, and in a final aspect of the game….

So at this point.. its just tough!  Your brain is fighting itself between knowing you are on a flat floor in strip mall, with all of the visual indicators though that you are at the top of building! 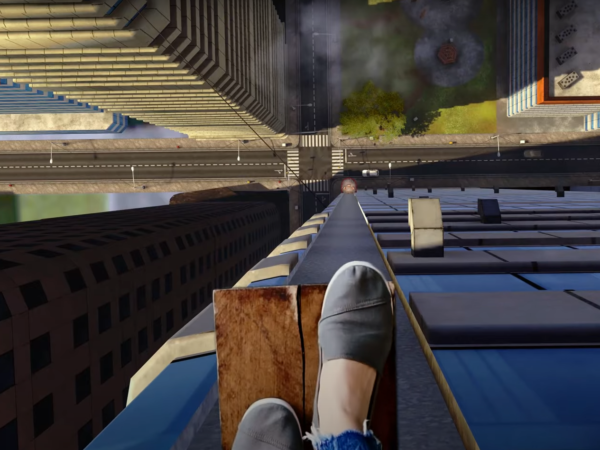 “Games: is probably an incorrect term.  “Experiences” would better describe.

For example, the Building Plank game that I just described above, is more aptly named as an experience.. and not a game.

But it’s one of those things you just have to do when you first try out VR!

The Excalibur VR website lists all of the currently available games.

I have tried Virtual Reality a few times… and you are reserving an amount of time with the gaming system, and in that timeframe you can jump in and out of games… to try out any variety of Virtual Reality experiences!

Looking at the list now, here is a summary of some of the games

There are even HORROR GAMES!

The website lists their safety protocols for virus free use, and also just general safety.

Pricing is based on time that you’ve rented.  Check the site for the latest details.

Typically when renting a gaming experience, you are given a dedicated game setup and “booth”