Land is being cleared on Delsea Drive (rt 47) just South of the 5-points intersection, for a new free-standing Dollar General store.  42Freeway first brought you this story in July of 2020.

The new Dollar General is just passed the Five Points Car Wash (on the same side) and directly across from the Tower Commons Office Campus.   McDonald’s is very close by across the street, and the Lamp & Shade Works building is just a little further to the South.

The new Dollar General property was previously an empty field situated between a few homes. 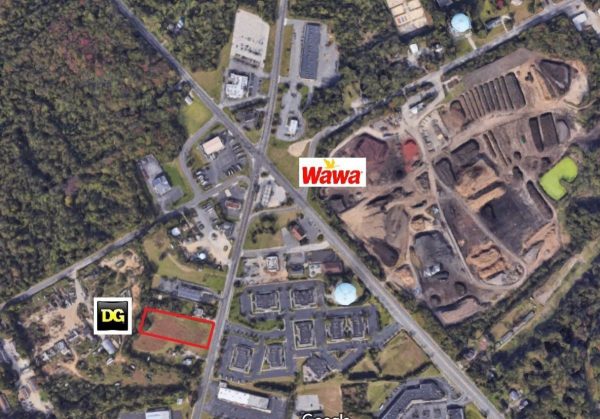 There is already an existing Dollar General operating very close to this location, in the Tower Square Shopping Center (fronting Egg Harbor Rd).

Tower Square is also where the popular Village Pub is located.

There is a real estate listing for the existing Dollar General property, listing the space as 8,911 square feet.   (PDF)

The new Dollar General that is under construction nearby will be larger at 10,640 sq ft…  not considerably larger but it is 15% or so.

So a larger store is one reason for relocating.

It would also seem that the location on Delsea Drive would provide a lot more “drive by” traffic.  It really does help function as free advertising to have your store where the cars travel!  “Oh yea, I forgot that was in the area”

And lastly.. Dollar General is expanding at such a clip, they have the process and costs of building new locations down to an inexpensive science.

1,000 new stores in a single Covid impacted year is a crazy number…  and of course not all of them are new construction, but where it makes sense they will make it happen.

This is an exact pattern that is being followed in Runnemede New Jersey, where the existing older strip-mall store is being replaced by a brand new free standing store directly next to the shopping center… and directly on the roadway!

It would seem the two stores are on a common development timeline, and it will be interesting to see how the two buildings differ, if at all!

As we called out in our July 2020 article, there are a variety of projects in play for the 5-points area.

We are actively researching an updated status on the Super Wawa and Bella Vista projects.