Posted on Published: May 9, 2021 Categories News 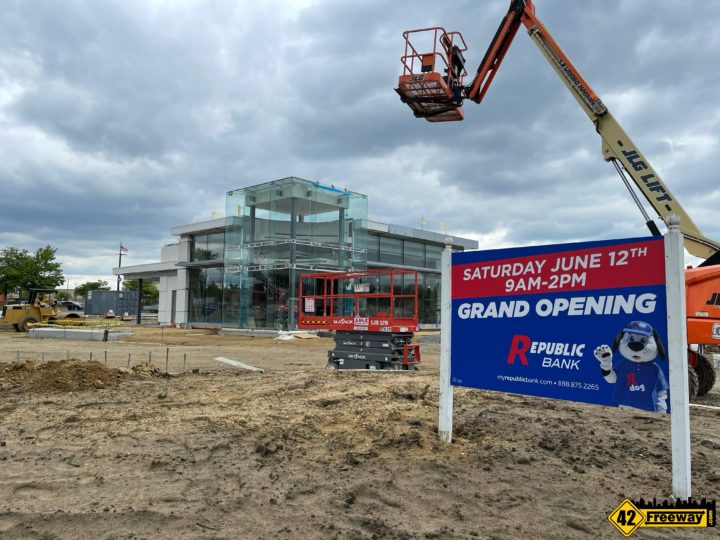 Deptford’s new Republic Bank which is under construction at the Deptford Mall parking lot is nearing completion, with a sign at the site announcing June 12th as the Opening date.

Unfortunately tho, we’ve learned that the proposed Krispy Kreme which was to be located next to the bank, is not coming.

And to close… I toss in another photo or two of now-under-construction Deptford Super Wawa on Clements Bridge Rd. This is it guys… it’s really happening!

We first wrote about the proposed Republic Bank back in April 2018, soon after they were approved at the Deptford Planning Board Meeting.

It has taken three years to get this far… a part of it has to be impacts from 2020’s restrictive construction environments, but also the developers had to get County Planning Board approval, and New Jersey Banking regulatory approval.

As I always say… these things take time!

The new bank is a free standing building in the parking lot of the Deptford Mall, sitting at the corner of Deptford Center Rd and Almonesson Rd, across from Outback Steakhouse.

While the core entrance to the bank will be from the Mall side, the new Republic Bank is positioned to face the busy traffic light intersection…. which will benefit the bank’s “drive-by” marketing.

A new turn-in lane has been created from Almonesson Rd to allow traffic heading from the intersection to turn right into the bank and mall’s parking area.

The Republic Bank will have drive-up lanes on the Mall side.

It was only last September that the Krispy Kreme organization was granted approval to build a doughnut retail store and bakery…. but just months later the rumors were flying that they had already pulled out of the location.

While the Krispy Kreme company has not replied to our inquiries, Deptford Mall management has confirmed that the beloved doughnut shop had quickly changed their plans, and would not be building in the Mall.

Yes, Krispy Kreme elected not to move forward with the location at Deptford Mall.

The Krispy Kreme shop was to be located directly next to the Republic Bank, with the Mall’s Almonesson Road entrance on the other side. It was also planned to be the doughnut bakery and distribution location for other convenience store sales.

42Freeway fans will undoubtedly be disappointed in this news… as our initial post about the plans for the store basically went “viral” with local enthusiasm, and additional media coverage.

That’s all we know.. If I knew “why” it would be here in this post! We have no details at this time if they are looking for other area locations… nothing.

Crunch Fitness Also Under Development at the Mall

We can’t post about all this activity in the Deptford Mall parking lot without mentioning again that Crunch Fitness is taking over the former Sears Auto Building, to convert it into a gym.

The Mall is putting in a considerable effort to get the exterior ready.. looks like a to of utilitity, sidewalk and parking lot upgrades have been under way.

We last wrote about Crunch Fitness on March 24th.

Speaking of long running projects… we announced last week that REAL BUILDING construction was starting at the Clements Bridge location (Which is in the Lowe’s/Edge Fitness area, and directly across from TD Bank)

Well… there are always a few skeptics… despite the new activity and signage at the site…. so we offer this new piece of evidence.

The massive underground storage tanks are on site, and construction trucks are digging the hole for the tanks,

And the building… additional construction has taken place, and I think things will really start flying up!

But remember, it’s only been a week! 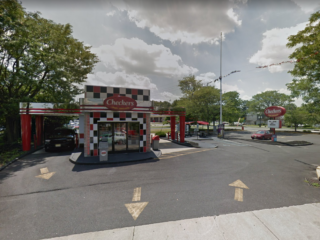 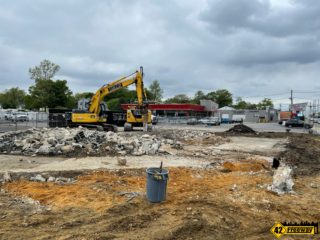