Melvin Brown Jr is an area business person behind “Fresh Development LLC” who was planning on making a bid for the Clementon Park property.  Around 10pm tonight he posted an update on his Facebook page explaining :

Today was auction day for South Jersey’s beloved Clementon Park!  Industry source InPark Magazine says a single bid for the entire park was accepted for $2.37 million, but that buyer is not known at this point… nor do we know their intent with the property.

InPark Magazine is saying that area bidder Fresh Development was not chosen for the property.

42Freeway broke the story back on February 16th that Clementon Park was going up for auction, presumably to recover debts.

The auction offered larger portions of the property for sale, including the entire property… and then if those larger bids didn’t pan out, each item of the park was listed for auction.

Official results have not been posted by the firm conducting the auction, Capital Recovery… but as we are saying here, it seems there was one “entire park” bid accepted.

The group placing the Entire Park bid is not known, and this is very important to be clear on…

No one knows at this point.

So, Martin and his team attended today’s virtual auction and tweeted key aspects of the auction!

Again, Mark from 42Freeway spoke directly with Martin, and got permission from him to put this “post based on tweets” together.

So InPark offers us some great information.. what was available to them… but not all of the information is available.

We don’t know if the “Park in it’s entirety” bid was accepted.

And we don’t know who put in the bid.

Well here are the key aspects:

There was ONE bidder for the entire property, with an asking price of $2,370,000

Even with the entire park bid in hand… it was not immediately accepted.

There is a chance that the “sum of the parts” is greater, so they still moved on with the individual item auction.

The bidder for the entire park was given the chance to increase their bid just in case.. they chose not to:

At this time they started the auction for the individual items.  REMEMBER: If the “entire park” bid is accepted, then these item bids are basically voided.

The Liquor Licenses was the first individual item to be auctioned. If this price holds up, for New Jersey this is a steal!

InPark Magazine calls out there are over 200 items to be auctioned.

I really could’ve used the Sea Dragon back home at Markaritaville! 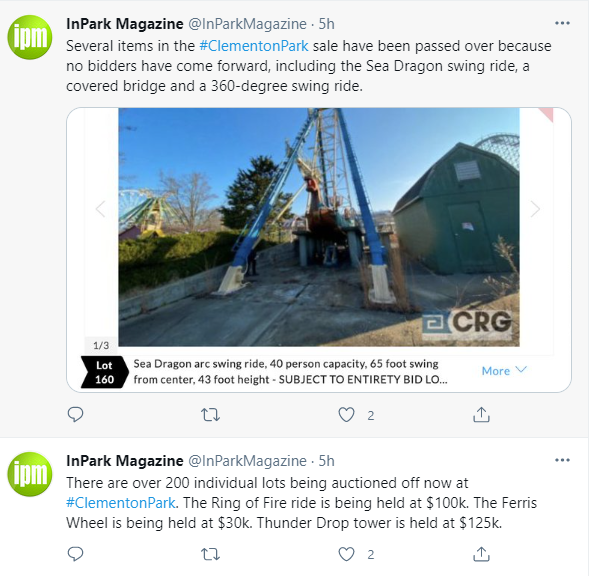 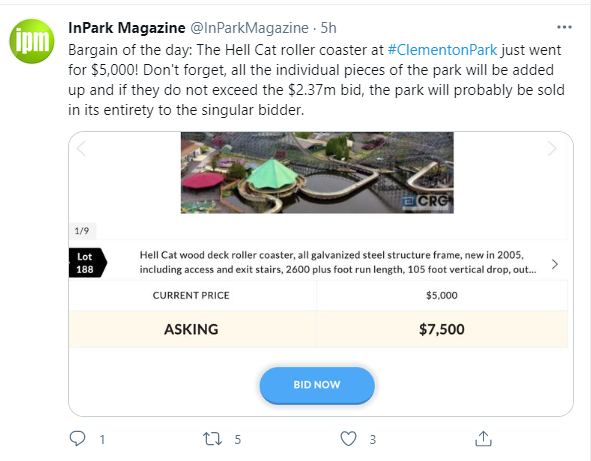 As we stated a few times already… this is basically two different auctions; Entire Park and Individual Items.

But then even that isn’t a guarantee.. right! 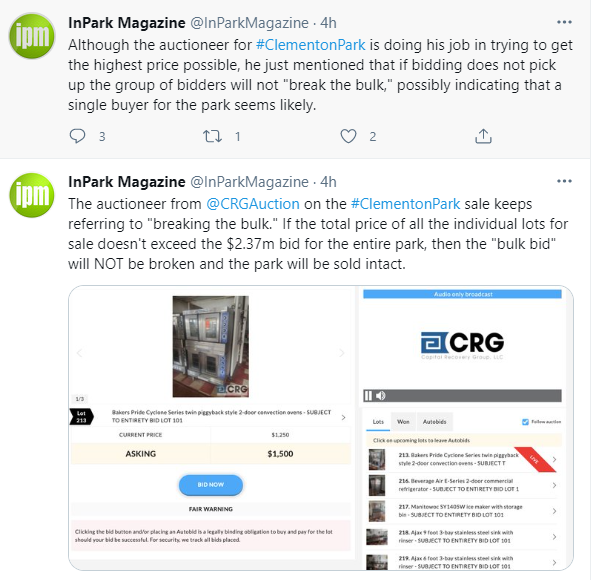 InPark Magazine “BREAKING: Clementon Park will be sold to the single bidder who bid $2.37 million”

Area Bidder Fresh Development Did NOT win the bid

Sicklerville’s Melvin Brown had put together a package to purchase the entire park.  His story was told at the Inquirer and at InPark Magazine.

They did NOT win the bid.

Read about Melvin Brown and his park bid at InPark Magazine!

So we really don’t know the true fate of Clementon Park.

But we are sharing what we know…

A big thank you to Martin and his InPark Magazine staff for allowing us to post this.

You can also subscribe for free to InPark Magazine at this link!