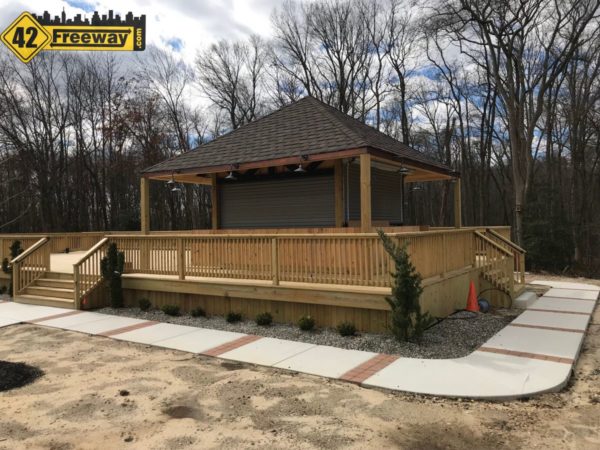 “Where is the best place to get wings?”

“Who has the best wings?”

It’s a frequent question of friends and social media users, and the Golden Nugget Tavern in Berlin New Jersey is one of the top contenders that is brought up in all discussions.  One thing that has set them apart from the others is they aree probably the only top wing spot which focuses on Country Music!   Yeee-haw!

And for 2018 there is another huge reason to visit this rural favorite spot…. they are at the final stage of creating a very impressive outdoor deck and bar! They started construction back in the fall, and the final steps include the bar interior, countertops, other finishing touches  and additional landscaping.  It’s clear they will be ready to roll ahead of the summer warm weather, but Jackie (daughter of the owner) says there is no solid deadline.

What’s is really unique about their setup is, instead of attaching it to the back of the main building as many other bars do, they decided to take advantage of the large property and develop the new deck and bar about 80 yards back from the building, at the edge of the woods.

There are a variety of distinctive elements.   The first item to jump out is the square bar area sitting atop the deck.  Instead of doing a “tiki” style bar, they are carrying the western country bar theme out back, giving it a rustic vibe.  Pure guestimate on my part but I’d say the bar will seat 24-30 people.

Then your mind focuses on the large elevated platform deck.  Plenty of room here for numerous tables, as well as room for outdoor band performances.

All of this is adjacent to the Golden Nuggets already popular outdoor competition horseshoe pit area.

With an eye on adding extra special touches, the entire deck is surrounded by eye-pleasing sidewalks, and the entrance features the bar’s signature name… a golden nugget.

SPOILER ALERT:  There is a surprising “oh that’s awesome” feature described next.  You may want to see the reveal in the video, instead!

So all of this can be seen from the main parking lot, and on its own its impressive enough.

But the Golden Nugget family throws a surprise at us.  As walk across the deck and head to the back, you notice a large ground level paver patio, surrounded by a sitting wall and… a very large gas fire pit!  This sits right at the edge of the woods, and you can already mentally paint a picture of sitting around that fire on a cool summer night, with the woods as a backdrop!

After taking photos and videos, I was greeted by Jackie, who is the daughter of the owner.  She gave me an extended tour of the new deck and bar, adding that they are planning to have bands outside, the bar countertop goes in Monday, and her father is working through some other interesting ideas, such as building a stream on the ground next to the deck.   In my video I refer to it as a “tiki” bar but Jackie points out its not tiki-style, and they are carrying the Western theme from the main bar into the outdoor bar.