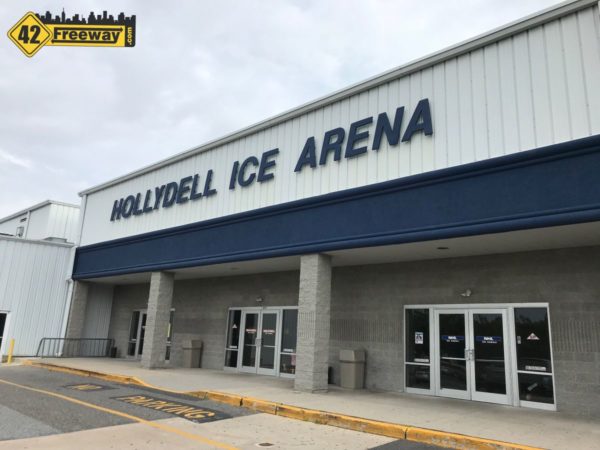 Remodeling is already under way at Sewell’s Hollydell Ice Arena, where they are adding a 3rd ice rink, and a second floor bar and restaurant!  Back in October 2017, the property was sold for $4.8 million and it seems the new owners have awesome plans for the facility.  Hollydell is acquiring a liquor license from Ruby Tuesday who has owned a license for years in Washington Township, yet never used it.   Not many knew they owned this license, and would also be surprised Ruby Tuesday  has another (third) license in our area besides the Deptford store (more on that later).

Anyway, management won approval earlier this year for the massive remodeling project, and wasted no time starting the project.  Literally it seems within a month after getting approval.

We reached out to Hollydell, speaking briefly with an employee who answered the phone, and then we sent an email to the property manager but he has been unable to reply.

Hollydell is located off of 47/Delsea drive down the side street of Terra Nova.  This is at the edge of Washington Township before you enter the Glassboro Route 47 Commercial Retail district.

42Freeway stopped in Monday night around 6:30 and got a passive look at the project, which made it easier to tie the twitter photos together.

The front of the building has a bump out extension which not too long ago was converted into a gym.  Now the gym equipment is gone and a third smaller ice rink is well on its way to being developed.  Crews from a specialty Ice Rink contractor have been on site building it out.

Finishing off the concrete!!!! pic.twitter.com/dMNh21RSiM

Hollydell has two main ice rinks separated by two story office and cafe area.  This entire are is being demo’d for remodeling.  The twitter account states the new bar and restaurant will be on the second floor, allowing patrons to look out over the two large ice rinks.  We’ve asked management for more details on the plans, but at this time we haven’t received a response (yet).  Friends who are familiar with ice hockey leagues say this isn’t as uncommon as you would think and their are other arenas in the region who do very will with this setup.   I am not familiar with the ice rink business, but the one that jumps to my mind is the old Coliseum in Voorhees which also had a bar on the second floor…  that was back in the late 80s, early 90s?  Did I just age myself?

This puts a second bar in this area as the very popular Terra Nova is just a few hundred yards away.  Glassboro’s Italian Affair is a mile or so up the road.