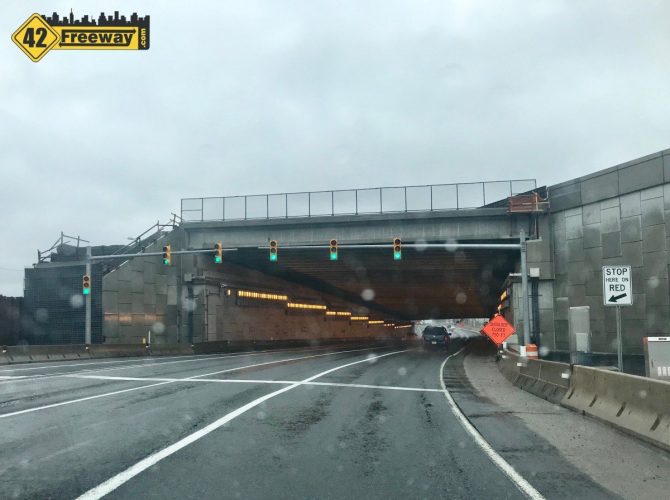 The new “covered roadway” tunnel which is part of the 42/295 reconstruction project has been in action for several weeks, with 42N-295N traffic routed through it.   This weekend the second phase of the tunnel redirection went live, with the 76E (traffic from Philly) which is heading to 295N, also moving through the tunnel.   In the first phase there was some concern with how the lanes merged before the tunnel and how the 76E lanes would fit…  well with this change they found a way to get all five lanes through the tunnel and even improved the flow a bit.  But there is still a merge in a new spot.  Read on!

Many were surprised in that first phase that the inbound traffic from 42N had the two right-most lanes reduce into one before the tunnel, and it introduced concern that when the second roadway was added into the mix it would even get tighter (We were one of the doubters)

Well after riding it today I can say that NJDOT had us all fooled… as the tunner actually can fit FIVE lanes through it.  Now that all interior construction is done, there are THREE lanes from 42 North heading into the tunnel, and the two lanes from 76E also!

The big “but” in the room is AFTER the tunnel ends, the two right most lanes merge together and its back to four lanes… so this is a traffic pattern change to be aware of.