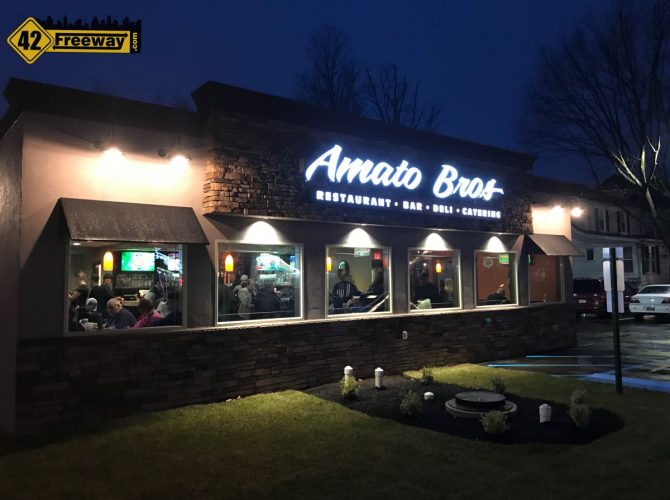 I’m still “young”.  Or at least I try to convince myself of that.  But my wife and I are at the age where our kids are full-fledged adults, but we still feel like we are 25 ourselves, so we can get out and about… sometimes a lot!   With the 42Freeway website, and our own activity, I feel that I know about every bar and restaurant coming into the wider area.

And yesterday my mind was blown.

A brand-new bar snuck up on me.  In Oaklyn New Jersey.  An area that I spend a lot of time hanging out at.  The new bar is Amato Brothers and it’s right on the White Horse Pike, almost dead center in the heart of town.

And I had no idea this was happening.

A friend sent me the Facebook page yesterday when Amato Brothers announced their soft-opening.  I was already comfy at home with a Corona Light getting ready to watch the Villanova Championship game, and my shear amazement at learning a new bar had just opened… well I was this >< close to getting out of the recliner and heading over.   If it were earlier in the night yesterday, I would’ve.  So I went tonight on the way home from work, instead.

So let’s talk about Amato Brothers.  There is much that amazes me here!

We have all of the bar combos in the 42Freeway area…  Mexican, Italian, Steak, Burgers.  But as far as I know, in South Jersey… there is only one DELI (restaurant) and Bar combo, and that is Amato Brothers.  Although calling it a deli is really underselling it (more on that in a second).

This is a brand new building in the center of Oaklyn’s White Horse Pike commercial district.  The outside is beautifully done, and the inside is just as nice.

The bar counter sat about 12 people (I didn’t think to count), and there are maybe 20 tables both high-top and regular.

An interesting twist is, they also have a more traditional food/deli take-out area setup in the back.  When you enter the main side door, if you turn left you head to the bar area.  Turn right, and its the deli pick-up and take-out area.

A few things to be very clear and honest about:

First, it’s probably unfair that they call themselves a deli, because the menu is huge!   As I sat at the bar I flipped through it, and it was 14 pages long, two columns per page, and about 20 items per column.  Easily… it was 250 different selections.  My wife was cooking tonight and this was an unplanned trip, so I didn’t order anything but we’ll be back soon.

Second, my interpretation is this is mostly meant to be a local spot.  It is not large.  Compared to other bars in the area, this is on the smaller side.  The parking lot maybe has 10 parking spots (and that’s being generous).  They are positioned to be very successful in a manageable way… well except for the first 2 weeks when the 42 Freeway readers crush the place.  🙂   If you’ve been to the Spread in Mt Ephraim, The Vault in Runnemede, or Amanda’s in Gloucester Twp… you’ll understand the “local spot” size and vibe.   (btw, I will be back around soon to some of these other bars I missed a few years ago).

So back to the new Amato’s.  The place is very open.  Lots of windows.  Bright but subtle walls.  And the bar area has the right amount of wood to make it authentic with character.  It felt nice, clean but also with character.

Being curious about the story of Amato Brothers and their liquor license,  I found it was best told by our friends over at NJ Pen.  They have several stories on the original Amato Brothers Deli, but this one from March 6, 2017 captures it all perfectly.  Originally the famed Mexican restaurant from Lindenwold, La Esperanza was planning on building a second location in Oaklyn on the site of the former Burger King.  The location was directly across from R-Macs and along the river.  The La Esperanza folks secured an Oaklyn liquor license, but things did not work out… and they decided to not move forward due to rising costs of a new building.

While its not clear to me which came first, the Amato Brothers Deli experienced a severe fire, and also purchased the liquor license from the La Esperanza family.  With plans to rebuild the deli, the shifted gears to make it a Deli and BAR.

So absolutely get over to visit Amato Brothers in Oaklyn New Jersey.  The food I saw coming out to other patrons looked awesome.  But the grand opening is still two weeks away, and even though I told you about them, maybe give them a few weeks to get things worked out, or if you get over there and its crowded, go visit my buddy Jim down the road at Mulligan’s or Lisa around the corner at the Oaklyn Manor and come back to Amato Brothers again!