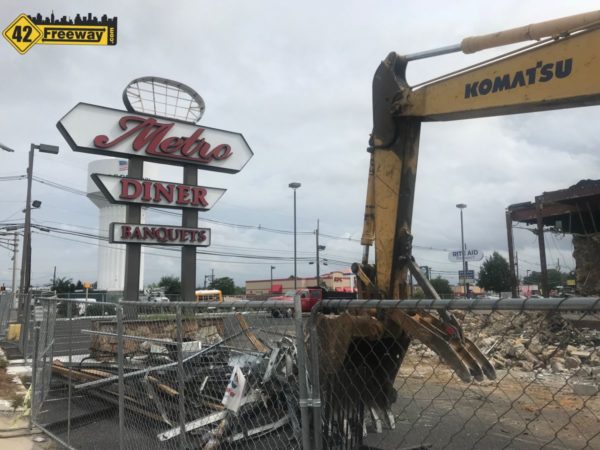 South Jersey Observer was the first to report today (FB) that the famous and loved Metro Diner in Brooklawn NJ, faced day one of the wrecking ball today.   Demolition crews were moving quickly through the outer perimeter of the building.  This is the start of the project to bring a new Super Wawa to the corner.

Many remember the diner also as Ponzio’s which traced its roots back 50+ years and held the name on the building until 2009 when the Metro owners took over.  The Metro closed back in June of this year after some doubt that it was going to happen… but 42Freeway was back on site the next day as the Metro has closed shop for good.

The added 42Freeway twist (we always have a twist, Carly)… is that we found out that the sale price of the diner property was $4.5 Million dollars.  This is a SIGNIFICANT price and more than other convenience store property purchases.

We continued looking at real estate transaction records and found that when the property changed hands in 2009, it sold for $1.4 million dollars.  This is a $3.1 million profit in just 9 short years… while it triples the value of the property, one must consider the money spent improving the property over the years (including initial costly upgrades when they took over from Ponzio’s)

Plus the diner held an always-expensive liquor license!  What we’ve seen in these purchases is, Wawa and it’s developer have no need for the liquor license… so the former Metro owners probably still have that license to use in another location.  hmmmmmm…..

We call this out to show just how extreme the “Convenience Store Wars” are in South Jersey.   As we’ve mentioned before, the “older” parts of Camden County are so developed that to get a key high traffic corner amidst the dense population and traffic… you have to be willing to buy out established businesses.

You have to also consider that the Ponzio’s / Metro Brooklawn building is a big and bould(er) building…  large stone support columns frame the glass window sides… so it’s no cheap price to demo this building.

Wawa is playing hardball to counter the influx of Royal Farms, having purchased other open and viable business properties, Clancy’s Sewell (now open as a Wawa) and the soon to be acquired Connie Mac’s in Pennsauken.

For more photos and video, head over to South Jersey Observer!