Mantua seems to be getting all the attention lately with posts!  Now a new (updated) large 10 acre project is being promoted by Soloff Realty for Woodbury Glassboro Road.  The project will feature retail buildings placed prominently along the roadway for maximum visibility, and medical/office buildings in the rear.

The specific location is currently a wooded property directly next to the newer Super Wawa (which sits at the corner of Lambs Rd) and directly across from the former Sony manufacturing property.

This is a new take on a project that has been hoped for, for several years.  Back in May 2019, when 42Freeway posted about the new Lambs Road Dollar General, in that post we called out that the developer wanted to also build on this same 10 acre property… and at the time this new project was expected to be all retail.

While this hasn’t reached Planning Board approval stage, Soloff Realty indicates a Dunkin (Donuts) has signed on to the project… which could speed up at least a small portion of the development.

The site plan presented by Soloff Realty shows three planned buildings along Woodbury-Glassboro Road, and two larger office buildings in the back.

For the retail component, the two leftmost buildings are smaller…  One to include a Dunkin store, the other indicated as a free standing unspecified fast food restaurant.

The third retail building on the right side of the Woodbury Glassboro Road entrance is a larger 12,000 sq ft “L” shaped building, which in artist renderings is labeled “Retail / Restaurant”.  This is not an indication that anyone has signed on, more so just to help drive interest from potential tenants.  Keep in mind they only indicate one signed lease for the entire project.. Dunkin.

The two planned buildings in the rear are indicated as Medical buildings.  Both are listed as 3-stories, but the first floor would be covered parking under the 2 stories of offices.   Combined, the buildings have the potential for 75,000 sq ft of medical/office space.

Access of course will include an entrance off of Woodbury Glassboro Road, but there are also plans for access from Lamb’s Rd, with an interior road running between the Super Wawa and the new Dollar General… effectively connecting all of the business with interior roads. 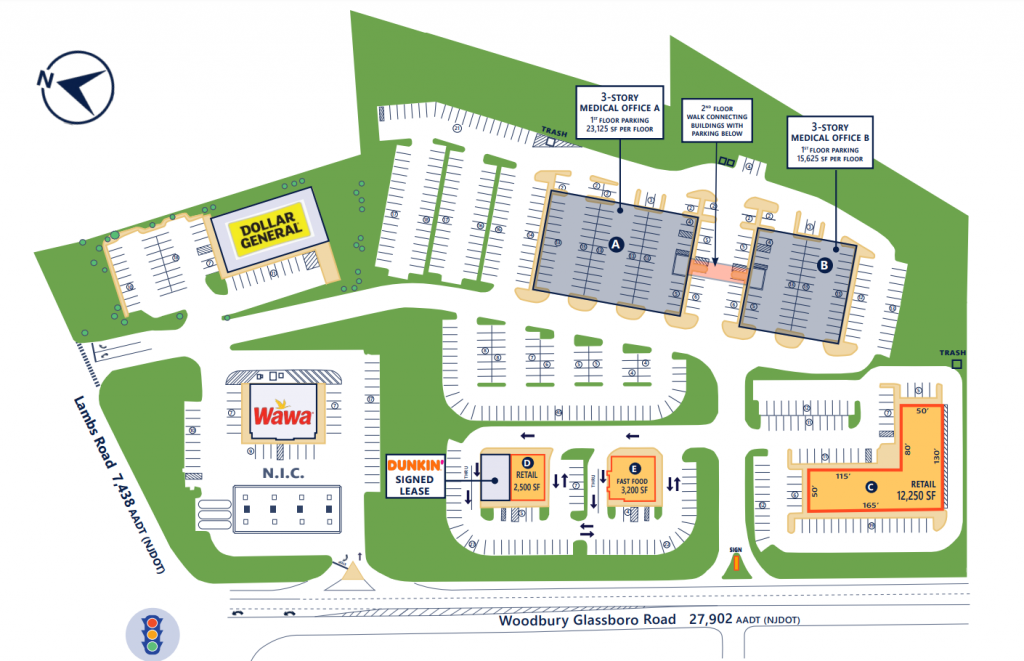 The project from 2019 was presented under a different realty company, so it could be argued that this is nothing more than a change in realtors… but they have added the medical office aspect, and now they indicate a Dunkin store with drive-thru has signed on to the project  It’s a small step, but it could be enough to get dirt turning over.

The Dunkin Donuts will be positioned basically right next to the Wawa… although there won’t be direct road access… I mean sure you can get from the planned Dunkin to the Wawa on interior roads, but the site plan shows it won’t be a direct connection of the parking lot  and would require some driving to get between the two.

A reader reminded us that there is a Dunkin location just a little more than a mile away at the Timberline Shopping Center.  I don’t know how this new location will impact that other Dunkin… but this new Dunkin is being developed with a drive-thru, which in these times is becoming more of a necessity.

What Happened to Clancy’s?

Most remember the Wawa corner as home to the Clancy’s Restaurant and Bar, who sold the property to Wawa developers.  The owner of the former Clancy’s still owns the liquor license, and has been quietly looking for the right opportunity in town… although to our knowledge there is nothing solidly planned anywhere.

This project is being presented by David Dunkelman of Soloff Realty.  If you are interested in being a tenant in this project, you can reach out to him via their website project marketing page.

We’ve featured Soloff projects in the past, as David and team are also the leasing company for Washington Center Shoppes in Washington Township. where a Chipotle recently opened, and First Watch is still planned to come in 2021.

… also the lease for Edge Fitness in Voorhees (Covered by our sister site Marlton Pike)!