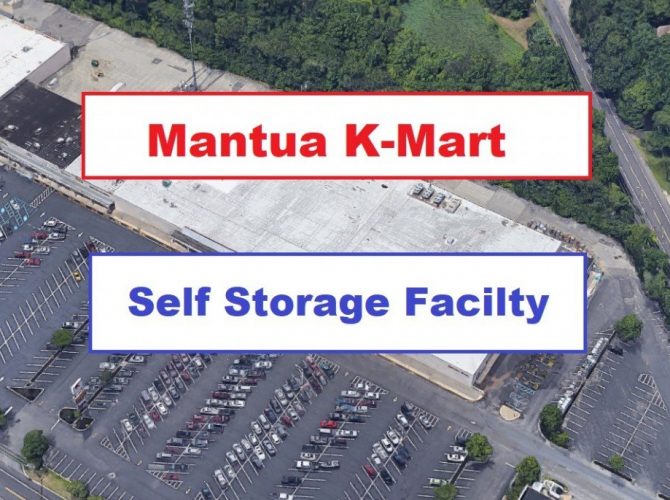 The closed K-Mart being at the Toll House Plaza Center on Bridgeton Pike (rt 45) in Mantua, is proposed to become a 98,000 sq ft indoor self-storage facility.   The center owners/developer will appear before the Mantua Planning Board on July 21st at 7pm, asking for “Interpretation of permitted commercial establishments allowed in a shopping center” as well as other requests.

Over in Glassboro, their K-Mart is being converted into a LIDL Supermarket, Big Lots, and Ross Dress For Less stores. Those plans came together within a year of the Glassboro K-Mart closing.  The Deptford K-Mart has been a Forman Mills for a few years.  The Brooklawn K-Mart center is owned by the same company that owns Mantua’s, and in Brooklawn they converted the K-Mart into multiple units, featuring a Planet Fitness gym.  Other K-marts in the area remain empty, including Lawnside and Blackwood-Clementon Rd.

From the public notice

The mostly forgotten large Bradlee's shopping center on the White Horse Pike in Stratford has been sold, and up first is a Royal Farms, a Dollar General, and much bigger plans for the remainder of the 22 acre property.

In June the Berlin NJ Planning Board approved a Royal Farms Convenience and Gas Store to be located at the intersection of Cross Keys Road and White Horse Pike.  The location is currently an empty lot at the busy intersection, which shares the intersection with CVS and King of Pizza.
This Post Has 0 Comments