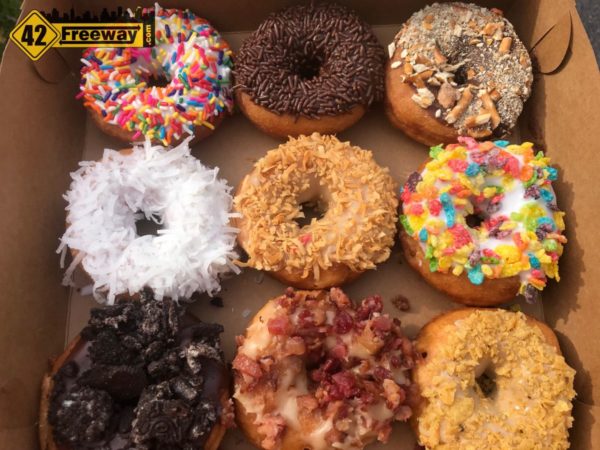 The sign has been up for about 6 months, and finally this week the MamaBuntz Donut Company opened it’s doors!  The shop is located in that small shopping center across the parking lot from PJ Whelihan’s Restauraunt in Washington Township, which is next to Kennedy (Jefferson) Hospital.

Read on for details, photos, and a video “review”!

It seems the larger chains are going the way of warehouse baked donuts (Dunkin Donuts, Krispy Kreme) but at MamaBuntz all of the donuts are made fresh in the store!

The big twist on the familiar donut offerings, is at MamaBuntz the focus is on the toppings!   Simply, they make one delicious variety of base cake donut… a vanilla flavored, light and airy donut.  From there you choose the style of donut you want, and it is made with a variety of ingredients to make delicious styles such as Cookies n Cream, Bacon and Maple, Vanilla Coconut, and even one with Fruity Pebbles!

It’s very much like ordering ice cream… like at Cold Stone Creamery where they take the base ice cream (typically vanilla) and the customer chooses ingredients to be added in.

I personally think its a great business model which keeps costs down for the owners (making one main base donut) and then making it fun to have your own personally mixed creation prepared for you.

They are focusing on the morning breakfast crowd with their donuts, and as one would expect… they are also offering a variety of delicious coffees from New England Coffee.

In less than a week of being open, word-of-mouth marketing is strong as they’ve been experiencing a steady stream of customers.  When I stopped in at noon on Saturday, there was a steady crowd of people coming in.

Tammy and Mike are the owners of MamaBuntz Donut Company.  They have lived in several Gloucester County towns, and currently are only a few miles away from their new store.  They are very happy with how the store turned out, the early traffic has been great… and they offered that the town has been very eager to assist in getting the store open, with town officials reaching out to them at times asking “how can we help you get the store open”

The store is open every day except for Mondays, and their hours are 6:30am to 1pm.

The 42Freeway video review of the MamaBuntz donuts.  Done in one take, so please excuse the mistakes!