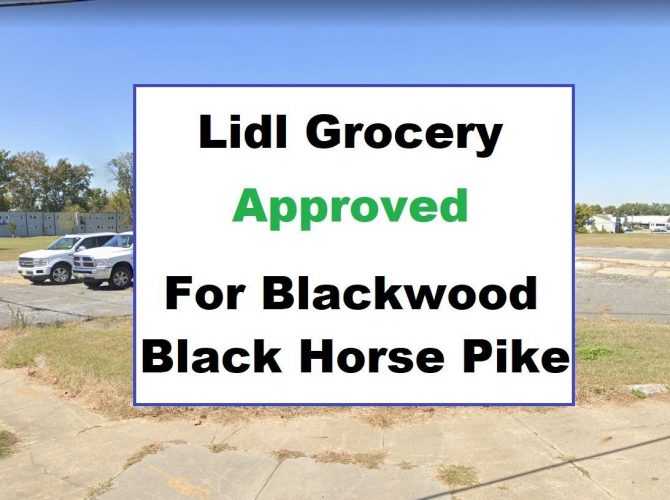 On August 25th the Gloucester Township Planning Board approved a new Lidl Grocery store which is planned for the Black Horse Pike in the Blackwood section of town.  Earlier that same day the Lidl Corporate site published a press release of “Plans to add 50 new stores by end of next year.  $500 million investment”, and Gloucester Township/Blackwood is listed.

We were the first to report on this store plans on August 14th.  The location is the large empty lot on the Black Horse Pike, where Lakeland/Davistown Road intersect.

As reported previously, this is the third time that Lidl has appeared for approval of a store in Gloucester Township, which could easily cast some doubt on the follow-through of this location… but there is a twist this time.

Lidl (US) Unveils Plans To Add 50 New Stores And 2,000 New Jobs By End Of Next Year.  Driven By Growing Base of Enthusiastic Shoppers, America’s Fastest Growing Retailer Will Invest More Than $500 Million In 50% Growth Spurt

The press release includes the list of cities where stores are planned, and within the list is:

I think most readers will take a “I’ll believe it when I see” opinion… but this is a strong vote of confidence that the store is going to be developed, and gets developed fast.

Other positive factors;  they recently opened a new Cherry Hill store (in their new slightly smaller footprint), and the Glassboro construction looks almost complete (well I need to stop over and check out the latest progress!).  It seems like things are back into full-steam-ahead mode for Lidl USA.

Interestingly… Lidl won approval for a Somerdale location earlier in the year, and that did not make the list of 50 stores in 18 months.

In Mantua (2017) they went as far as paying $3.25 million for 5 acres of land on Woodbury-Glassboro Rd… and then decided not to build.

But that was under the original US plan with a larger store footprint.  It seems things changed since the first round of US stores were built.   The Cherry Hill store survived the transition as Lidl had chosen to go back to the planning board and get re-approved for the slightly smaller stores they seem to have moved to in the US.

And yes I would bet they get a tax break.  It’s a core piece of the Gloucester Township development strategy, and the Lidl property sits in a redevelopment zone.  A typical plan is 5 years… say 0%, 30%, 50%, 70%, 90%… then 100% of the full tax/PILOT amount.  I know people go nuts over this, but right now the Premium Outlets are paying over a million dollars a year in taxes/PILOT.

I don’t know all of the factors in developing a large commercial project, but Gloucester Township seems to have streamlined things.  An entire 90+ store shopping center went from announcement to opening in like a year.  The Dave & Busters, outside of Covid pause, also popped up in less than a year.   Over in Cross-Keys the new Urban Air building went up quickly also.  Let’s hope the same for LIDL!

The Black Horse Pike runs from Camden to Atlantic City, and traces its roots back to the 1700s as being a main road across Southern New Jersey.  Towns and Commercial districts grew along it’s entire length.  But post-war road construction of the 42 Freeway (1959) and the Atlantic City Expressway (1965) moved significant amounts of traffic off of the entire length of the Black Horse Pike.

People always say “less traffic is great!”, but in the case of the Black Horse Pike, it caused downturns for many of the commercial districts and towns.  Redevelopment efforts are a constant thing along the entire length.

A quick google search sees mentions in Mays Landing, Regional Camden County, Egg Harbor, Runnemede,  Camden, and in Gloucester Township there is the “Villages of Gloucester Township Rehabilitation Plan”.  The focus to build up the economic prospects of the Black Horse Pike even spurred a full report by the Delaware Valley Planning Commission (PDF)

Which brings us to Blackwood, Gloucester Township.

With the opening of the Gloucester Premium Outlets several years ago, everyone who saw the future success… saw the potential of what it could do for the surrounding area.  We are seeing that with the Dave & Busters location (opening soon, hopefully!), the recent Dollar General store, a new Dunkin Donuts (and the remodeling of the shopping center)…

And while the Dave & Busters is a very big deal (drawing in visitors and shoppers from a wider area)… a new grocery store is a big deal on it’s own level.  New grocery stores are just tough to come by.

And in my opinion.. the Lidl store doesnt even get to planning, if not for the Outlets being a block away.

Oh and also down the road a ways towards Skeeters, a large housing development was approved. And another was recently approved on the other side of 42 across from the outlets (I plan to post on that soon)…   So new residents, with multiple shopping options, and a new grocery store?   That’s a great catalyst to for a rebirth.

Yes there is still much work to be done on the Blackwood section of the Black Horse Pike.. but if the Lidl grocery store gets built.. and quickly (as I suspect), we can only expect more progress to take place in Blackwood.

And it’s not all about big stores in big boxes.  Shana’s Wild Fig is enjoying success in a repurposed “old Blackwood” storefront.  The Holy Tomato is a beloved mainstay on the Pike… and there are many other smaller and older buildings which with new stores drawing people to the Black Horse Pike, should also be primed for new life.

I read almost all of the comments.  “When are the gonna do something about the Black Horse Pike?”.   “Oh a Dollar General? is that the big rebirth?”.   “They are tearing down that entire block”.

Well seems Blackwood is getting a grocery store.  On top of a major outlet mall.   And an major entertainment venue. These are big things.  These are rare.

Cue the “but what about the traffic” comments! 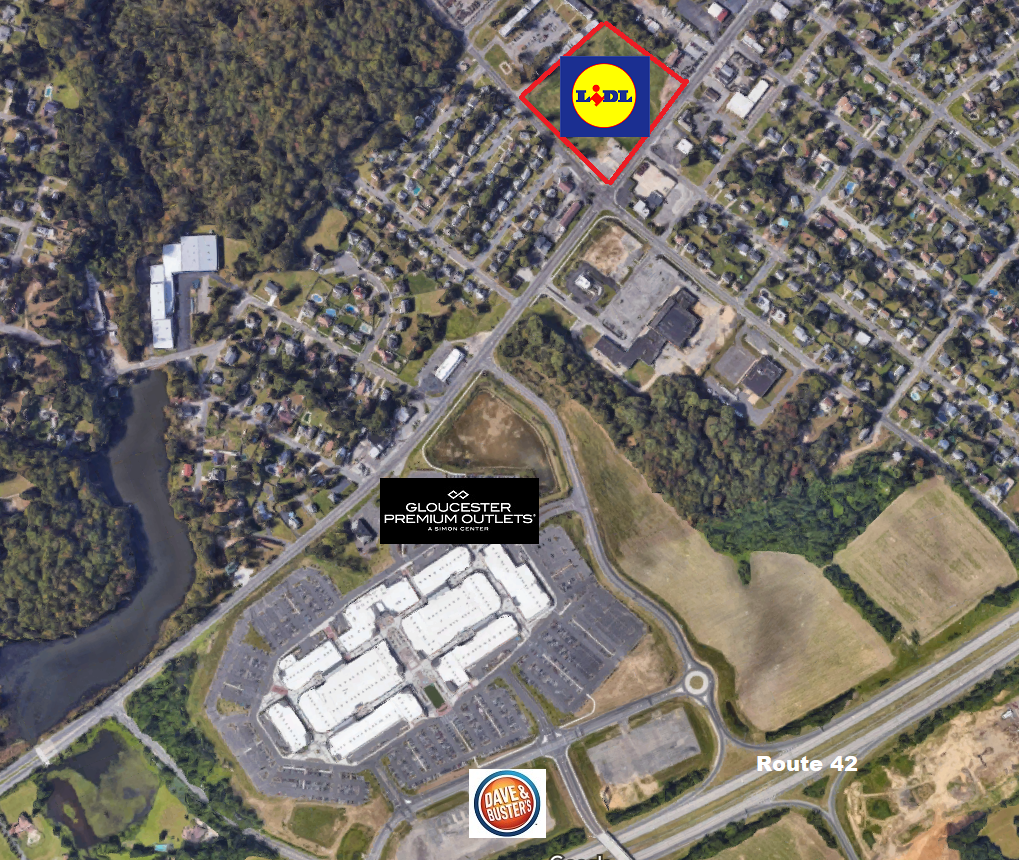 LaScala's Fire has opened in Glassboro's Rowan Boulevard at the University! It is a large and modern Italian restaurant, and soon the full bar will be available to patrons. We have photos and information on restaurant. When the bar opens, this will be the THIRD full bar on the boulevard (and more adult beverage options are coming!). Plus the new Monarch Diner offers alcohol. LaScala's Fire continues the amazing transformation of Glassboro's commercial offerings.

Kentucky Derby betting started today (Friday) at Favorites on Blackwood-Clementon Road in Gloucester Township. 42Freeway never got around to posting about them when they opened 4 years ago, so we give our readers a peek into the venue, and what to expect if you brave the crowds for the Derby.
This Post Has 3 Comments