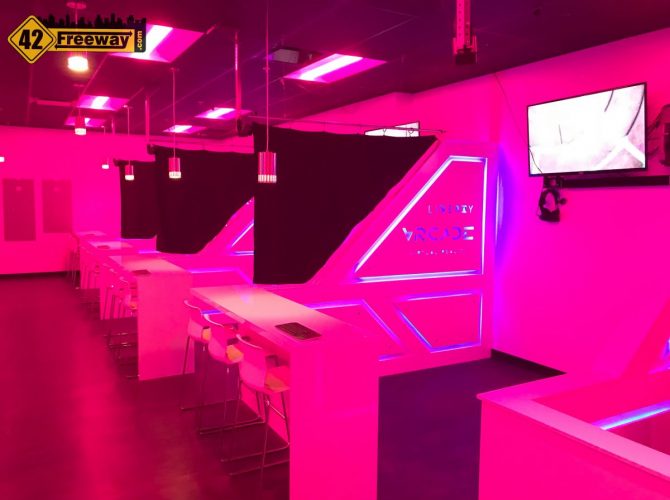 Just a few weesks ago, Liberty Virtual Reality opened in Glassboro’s Rowan Boulevard.  The location is close to Chickie and Pete’s.

Liberty Virtual Reality is a modern day 3D virtual arcade.  You put on a VR headset which offers a variety of 3D virtual world experiences.

If there is one thing you need to know… I tried it.  It was VERY cool.  You forget you are standing in a room.  When I played the Mine Cart shooting game I felt I was in an actual Disney Ride.

So let’s back up a second.  What is this?

So the room is broken up into about 7 or 8 “rooms”.  They are open to the larger room but segregated.  Each has a small counter up from and an area for the “player”

The player puts on a headset which includes monitors which completely immerse your vision.  You are given two hand controllers (like Wii on steroids) which can be a variety of things in the games.  As you move your head around, the live images updated perfectly in unison giving you the feeling that you are in the digital world.

The first game I tried was Plank, which  takes you to the top of a very tall elevator, which opens up to a plank of the side of the building… and you have to walk out.  Not really a game, but more of an experience.  I had to mentally convince myself that I was in in a room in Glassboro and walking out on the plank was completely safe.  And then I intentionally jumped off!

I also played a fire game where I flew around a city and using a firehouse put out fires.  All in 3D viritual.

The last game was the mine game… which was actually like a boardwalk shooting game, but in a moving minecart.

They have dozens of games to choose from, and you pay for time, so you can jump around to different games,

To get the word out, right now they are running a Groupon special

Liberty Virtual Reality Arcade is open weekends and the end of the week, but I suggest for any of the Rowan Boulevard business you check their hours before heading over while everyone builds up their business base.

I haven’t learned the details of who owns the business, but I understand it to be another group of young 20-somethings who own several escape rooms and are now branching into the Virtual space!

Later in the month is their official Grand Opening.

Don’t forget while you are there to check out the other exciting new businesses on Rowan Boulevard, including these which we’ve already featured; Cookie Munchers and Ricci’s Hoagies!

Primitive Axe opened this fall in Glassboro, in the shopping center located directly behind the Glassboro McDonald's on Rt 47. Axe throwing is the new hot thing right now... and it's exactly what it sounds like... group outings where you take turns throwing an axe into a target for points! Read on for more, and photos!

The Brooklawn Shopping Center surprises everyone with the start of construction that will completely transform the shopping center! They are adding a diverse mix of new tenants, including national retailer Petco, a thrift store, and a dialysis center.

Washington Township officials have taken things into their own hands regarding the closed Watson Turkey Plant, and they are deep into the town sponsored demolition. Town officials have made photos and a short drone video available of the progress.
This Post Has 0 Comments