In January of this year, Inspira closed on a 30 acre undeveloped property on Clements Bridge Road, in Deptford.  This is a widely known and discussed property located close to the Deptford Mall, and directly across from the old Pathmark Shopping Center.  The purchase price was listed as $4 million dollars.

The company taking over the property is listed in tax documents as “Inspira Deptford Healthpark LLC” and lists an address of 165 Bridgeton Pike Mullica Hill, which is the Corporate office of Inspira Health Network.  Inspira is a healthcare network in South Jersey, widely known as the owners of Underwood Hospital in Woodbury, with other large facilities in Vineland and Elmer, as well as a many other small facilities in the region.

Many people refer to this area as the location of the long planned and delayed “Deptford Movies”… but in fact the large undeveloped acreage across from the old Pathmark is actually TWO properties of 23 and 30 acres.  The Deptford Movies company “Bonus Ball” owns the right half of undeveloped acreage, which surrounds the Chiropractor’s office and is more directly across from Rastelli’s Market.  The Inspira property is on the left (north), sitting directly across from Pathmark  Shopping center up to the traffic light, and has the Greenbriar Court dead-end road as a border.  Currently you can see two small rundown buildings along Clements Bridge Road which appear to be part of the Inspira property and define the border between the two properties.

Last year it was reported that the Movie theater developers stated their delay in developing was because they were negotiating with an unnamed healthcare provider to take over the movie’s property.  This was same time that Inspira publically announced they were looking to build a new hospital in the Gloucester County area, and it wasn’t a stretch to consider if Deptford would be the new home.  Inspira has since chosen Mullica Hill (close to Rowan University) for that new hospital.

It seems that Inspira still has plans for Deptford and that there was validity to the claims from the Movie Theater developers.  I exchanged messages with one of the movie theater developers in the fall and was told they still had plans for the theater after they complete another Delaware project.  “have not given up on Deptford”

I searched on variations on the terms “Inspira Deptford Healthpark” and have not yet found any additional information, and will contact Inspira for more details to understand what is planned for Deptford.  Other health care organizations use the term to describe a larger patient care facility built to support large numbers of medical and dental patients.  An unrelated facility being developed in Vineland is planning on 27 exam rooms.  But again, there are no details on Inspira’s Deptford plans.

Assuming they have plans for a medical facility in Deptford, this would be the second big medical facility news for Deptford, as Nemour’s is currently finishing a large Children’s medical facility around the corner from the Inspira property.  The location is a big win for the facilities, as there is plenty of access to highways, large populations, and the positive retail climate in Deptford gives visitors many options while visiting.

And a hat tip to NJ.com for listing this purchase in their recent real estate transaction listings, as a general purchase notice. 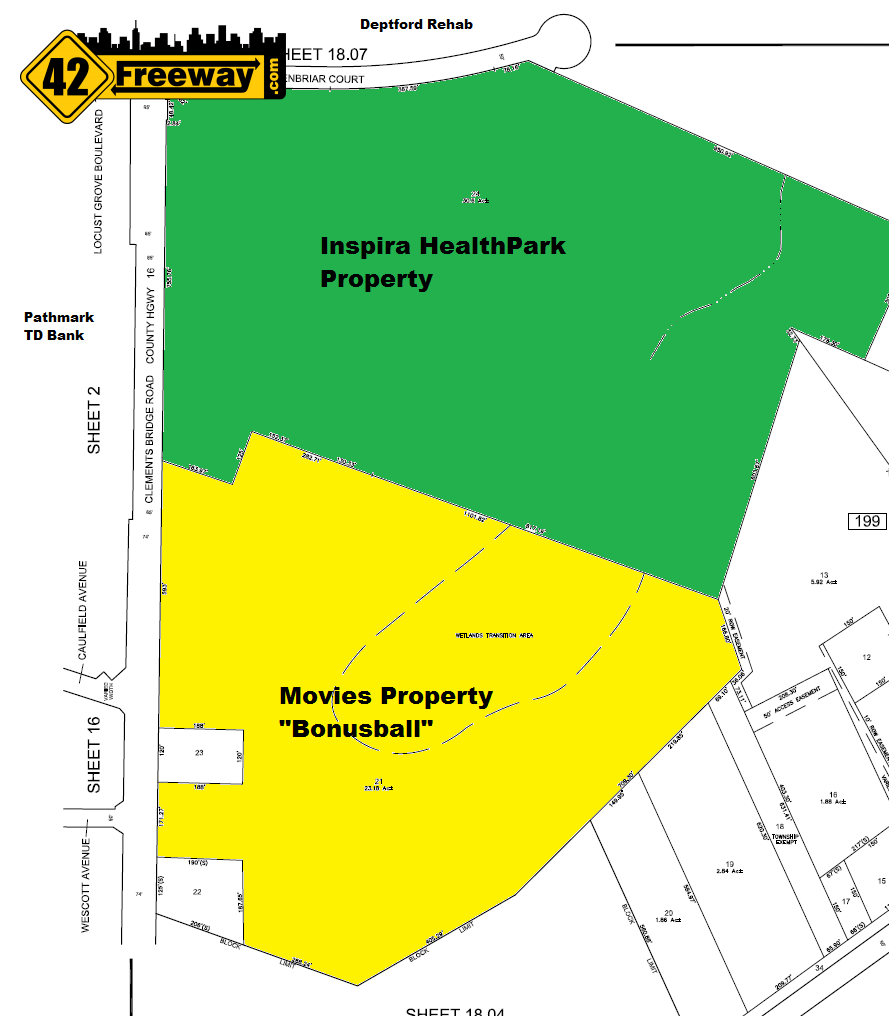