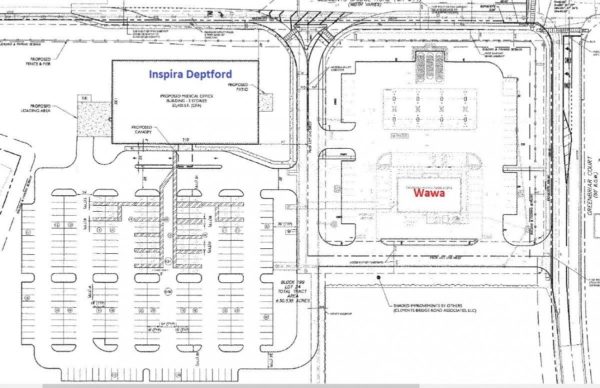 42Freeway broke the story over 2 years ago, that Inspira had plans to develop some type of medical facility on Clements Bridge Road in Deptford.   And yes the Movie project was (and is) in the mix, but back then in 2016 when we first wrote about Inspira no one knew about the Super Wawa which was also being planned for the large undeveloped plot of land.  And now 42Freeway presents to you a preliminary site plan of the Inspira Deptford project, which also includes a plan for the Super Wawa… and the proposed new road makes another appearance also!

42Freeway was the first to write back in July 2018 that the developers of a Super Wawa were appearing before the Deptford Planning Board, and we did a followup post and video after attending that presentation.

So regarding the Inspira siteplan drawings… I say preliminary because the drawings are over a year old, but they were reviewed by the County Planning Board just this summer…so it’s safe to assume that what we see here is close to being the final general layout.  Projects like Inspira and Wawa require approvals from several government agencies, not just the town… and since Clements Bridge Road is a county road it’s even more important to get the County’s approval.

All that being said, Inspira has not appeared before the Deptford Planning Board yet, so things may change.

The site plans that 42Freeway gained access to confirm the placement and general size of the Inspira property which we previously wrote about… and the new official diagram provides details on the building size and placement.

The building is listed as being a 50,000 sq ft two story rectangular building.  It will be positioned closer to Clements Bridge Road, with the core of the building’s parking positioned behind it.  A main entrance canopy is also depicted in the drawing, in the back of the building.

The new Wawa will sit at the corner of Clements Bridge Road and Greenbriar Court, and Inspira will be next to it and almost directly across from the Columbia Bank.   The clean up and demo work you see taking place on the undeveloped property seems to be part of the Inspira project.

The building dimensions are shown as 210 feet wide and 120 feet deep.

42Freeway does not have any front “elevation” depictions of the building.

The developers of the Inspira and Wawa are working closely together to make sure the properties are developed together in smart ways.  For one, they are sharing a stormwater runoff solution with water being carried to a basin further back.

Road access is also being developed “smartly”.  Instead of having traffic coming off of Clements Bridge Road and dump directly into the two individual properties, the developers are putting in a shared access road between the two properties so that cars can more safely pull in off of the busier local Clements Bridge Road and then from the access road turn left into Wawa or right into Inspira.

There is a second access road which will come off of Greenbriar court and run along behind Wawa.  This gives customers and patients safe access to the existing traffic light, making it easy to head out in all directions.  I think we can assume that someone coming West on Clements Bridge Road will be expected to turn left at the traffic light at Greenbriar, and they will not be allowed to turn left across Clements Bridge Road in front of the new businesses.

In essence, the new Wawa will be surrounded on all four sides with roads, but only the two new access roads will allow cars into the property.

As I just mentioned, access into the Wawa will be from the new side access road (between Inspira and Wawa) or the new rear access road which will come off of Greenbriar Court.

Not much to add about the Deptford Movie project.  Back in August at the Super Wawa Planning Meeting, the Deptford Movie’s owner was there, I sat next to him, and we spoke briefly.  It was clear to me he is intent on building the theater and other stores.  He also appeared before the planning board earlier in the year for an updated approval.  I do not have the site plan for the project, but I am working on it.

In a prior post we also broke the news that a new full “Deptford” road is planned for the property, connecting to the Greenbriar Court Road, meandering through the large property behind the Wawa and Inspira, and curving up to connect with Cooper Street.

While I haven’t seen an official movement on the project such as formal hearings or bids… a segment of this proposed road is seen in the Inspira site plan!    I would fully expect that we will see the Inspira and Wawa buildings be developed before the roadway sees any action, but it’s interesting to note that it seems planners and politicians are serious about making it happen.

Video below is a repost… this was originally published on Aug 9, 2018