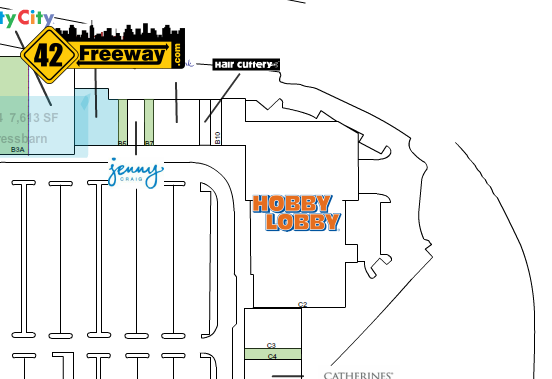 The surprises continue to roll in for the Almonesson Rd area of Deptford, with the signing of Hobby Lobby coming to join the new Burlington Coat Factory at the Court at Deptford!  The folks at DLC Management are really turning things around at the shopping complex which not too long ago looked more down than up.  And actually, the transformations that have happened in this small area of the Deptford Township retail powerhouse district are really quite remarkable with EIGHT major store openings and signings in just the last 18-24 months.

The Court at Deptford is well known as the home to Red Lobster, Olive Garden, and Ross.  It took some tough hits over the years starting with the departure of the original Deptford Sam’s Club but is now turning into a thriving center with the very soon to open new Burlington Store and a larger Party City store at a new location.

The DLC website puts the new store in the back right corner of the shopping center, taking over a combined space that originally housed the Branch Brook pool store (and possibly some of the Circuit City location).

Just when we thought up-and-comer Gloucester Premium Outlets was going to take the 42Freeway retail championship belt away, Deptford comes back strong with another surprise upper-cut!

This is the second area new Hobby Lobby to be released… with another store coming to the Cross-Keys development.  One thing I learned after posting that story, is that people LOVE Hobby Lobby, or at least love to talk about it as it quickly became the most commented, read, and shared story in the short 42Freeway.com history.

I drove through the Cross-Keys shopping center just this past weekend.  It will be a new building, and there is absolutely no sign of construction there.   Makes me wonder if the Deptford location opens first?!

For more information on Hobby Lobby, read my prior post on the Sickleville/Cross Keys planned store where I offer a little more details on the Hobby Lobby chain.

More details to come as we get them…  literally was just checking the DLC website on information regarding the Burlington store!

The Village Pub is taking over the hot spot previously known as Lazy Lanigan's and they are targeting an early May opening. Bar Week at 42Freeway.com

The Deptford Walmart, while 5 miles away from the Philadelphia Eagles stadium, features an extensive assortment of New York Giants holiday product. Yesterday I FB live streamed about it and got some interesting comments. Today, I offer additional written commentary.

The Woodbury Heights building which housed the Bruster's Ice Cream and Nathan's Hot Dog eatery was only about 6 years old, but this week it was demolished to make way for a new Starbucks.
This Post Has 10 Comments