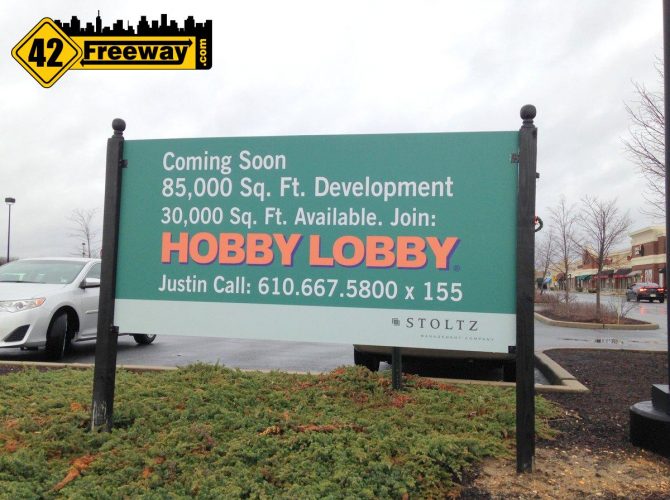 The five year old Shoppes at Cross Keys in Gloucester Township (Home of Texas Roadhouse and Bertucci’s) recently received approval for an 85,000 sq foot retail addition, and the big fish they’ve landed to fill a large portion of that space is Hobby Lobby.  Hobby Lobby is a retail arts and crafts store in the same category as Michael’s and AC Moore.   Looking at the store locator map, while they have a location in Millville NJ, the Gloucester Township store appears to be the first in the immediate Philadelphia metro area.

Another distinctive aspect of Hobby Lobby is the owners have very strong Christian beliefs which influences their management decisions.  All stores are closed on Sundays so that family members have time to worship and spend time with their families.  Also, the stores made national news in 2014 when management chose to not offer contraceptives to employees as part of the Company provided health-plan, citing a conflict of religious beliefs.  The case went up to the Supreme Court, and with a 5-4 decision Hobby Lobby won the case.

Recently, residents in a Deptford Facebook forum were commenting about Hobby Lobby moving into the same Almonesson Rd shopping center as the upcoming Burlington Store.  In a September facebook post on the Hobby Lobby page, the page admin was asked about a Deptford store and the admin replied that none were planned for Deptford.  The news of the Cross-Keys store makes one think that there was some truth to the Deptford store rumor, but in the end Gloucester Township won out.

Others have reported that the Shoppes at Cross-Keys has seen some rough spots since opening, and supported that statement by identifying the store turnover.  But it is interesting to note that they continue to pull in new tenants, and see financial benefits of expanding the center.  Coupled with the upcoming Premium Outlet Mall (which is seeing fast development progress), Gloucester Township continues to challenge Deptford as the retail center of Route 42.

Jersey Mike’s and Panda Express Washington Township Are Close To Opening! Hiring Now! Jersey Mike’s Mid-December!
Two new restaurants opening soon in Washington Township! Jersey Mike's Sandwiches and Panda Express are nearing completion in the beautiful new building on the Black Horse Pike at Tuckahoe Road.   We've confirmed that Jersey Mike's is targeting a mid-December opening... not clear on Panda Express, but it doesnt seem too far off.  Both new restaurants are hiring now!   And this Jersey Mike's has a very local connection!
Glassboro LIDL: Sign Is Up! Interior Work Has Started! Now Hiring! Plus Chipotle and Chase!
Glassboro's Collegetown Shopping Center transformation continues at full steam ahead, with significant progress on the new LIDL, Chipotle and Chase Bank!   We stopped in on Sunday November 22nd and have a photo update for readers!
Direct Connect 295 November 2020 Update. Support Columns Going Up (Video)
Mark from 42Freeway heads back to Bellmawr's massive Direct Connect project, to review what has changed in the last few months.  And yes, there are new things to talk about. This update is really a 7 min YouTube video (bottom of article) but we'll highlight here in writing and photos the things in the video.