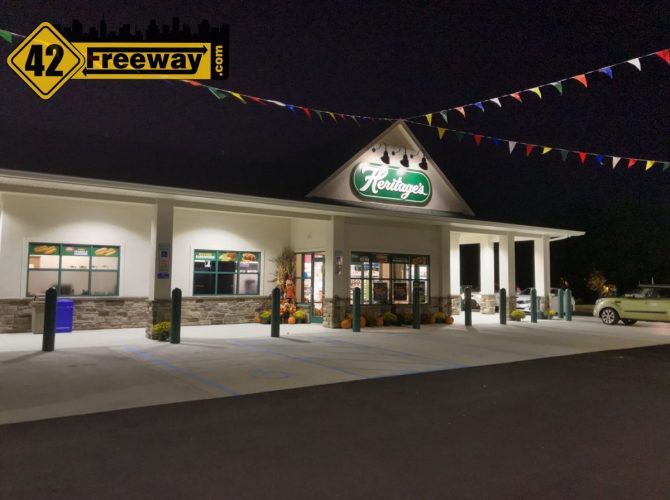 With Wawa and Royal Farms taking over the convenience store news in our area lately, locally owned Heritages’s Dairy isn’t sitting back quietly… and they have opened up a new larger format store in West Deptford, at 999 Grove Road.  I was told by local management that this is the third similar store developed, with the other two being in Clayton and the Cape May area.

Compared to the “old school” Deptford area locations that I am most familiar with, the new West Deptford store is close to double the size, with more room being added to the general floor area, the coffee stations, and the back counter deli/register area.

The store is bright and modern, and fits right into the mix of new convenience stores we are seeing from its larger competitors.  The biggest change I noticed from the Heritage store near me, is the focus on coffee.   I love my little Hurffville Rd Heritage’s but lets be honest, the coffee set-up there is almost a “well its there because we have to have it” and it’s not really a primary thing .  But in the new West Deptford store it’s clear that coffee is meant to be a prominent part of the store.  Right up front they have EIGHT coffee urns (similar style to Royal Farms) featuring a variety of flavors, and a very large central counter area for preparing coffee.

The store was very bright and modern, and unlike its main competitor Wawa, you can still get fresh vegetables… I in fact picked up a head of lettuce and a tomato on my way out!  Can’t buy that at Wawa!  And you can get freshly sliced deli lunchmeat at Heritage’s too!

And if supporting locally owned businesses is your thing (isn’t it everyone’s?), you can’t get more local than Heritage’s.  Their headquarters is right in Thorofare, and their first store opened in Westville!  As a kid growing up a long time ago in Bellmawr, we had a small Heritage’s based store on McClelland Ave just a few doors down from my childhood home.  Their websites “About Us” page presents a very interesting and detailed Company history.

I was trying to figure out how many locations they have today and couldn’t get an accurate count, but browsing through they store locator I was surprised that its many dozen and it seems that as the competition gets tough, Heritage’s is getting tougher.

Up next in my Convenience Store coverage… the remodeling of Wawa.  Hey, they say competition is a good thing, and its clear the soon to open Royal Farms stores are stirring things up in our local Convenience Store industry!

Now if we could just get one of these fancy new Heritage’s stores in my Deptford neighborhood.   Heck, give me a call, I can even point out a few good locations for it!

Dinner Bell, a new Indian Restaurant, has opened this spring in the Glendora section of Gloucester Township.  The new restaurant is located on the Black Horse Pike, directly behind a Dunkin Donuts.

The Friendly's Restaurant on Route 45 (Deptford/Mantua) was torn down recently to make way for a new CVS pharmacy, which will be relocating from across the street.
This Post Has One Comment