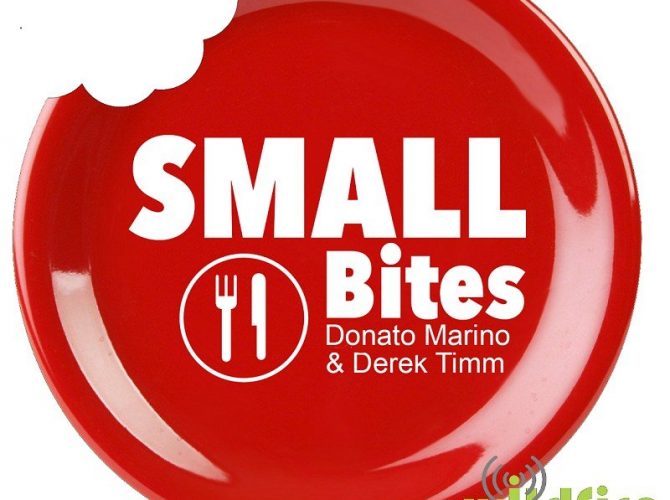 On Sunday June 2nd, Mark from 42Freeway was a guest on area podcast “Small Bites”.   While it’s an hour long radio podcast show, I am featured in the first 10 minutes of the show…   so if you want to jump ahead follow this link to the show page and you can stream directly from the web browser, or there are also links to the Apple and Google podcast app links.

Well it’s more than a podcast show, as it is also syndicated on several AM radio stations.  But I’ll stick with podcast as I reference it!

For those that don’t know what a podcast is… a podcast is an internet radio show where the shows are recorded and made available via the web, or podcast applications on smartphones (if you have an Apple phone, you have the Apple Podcast app).  In today’s digital world podcast shows have become incredibly popular…. some of the most popular national shows have millions of listeners.

Small Bites is an hour long show about food, beverages, travel, nightlife, books, magazines, entertainment, and all topics related to the hospitality industry… and focused on the Philadelphia and South Jersey areas.  So close… the Wildfire Radio studios where it is recorded are located right in Westville NJ.  Honestly, I was impressed by the setup, the people and entire experience.  Most people try to run their podcast from the homes and this is a REAL business with REALLY talented people.  The podcast seems to be doing very well as they state Small Bites is the #1 listed food radio show Philadelphia and the most popular* weekly hospitality based program.  Celebrity guests include Chef Robert Irvine, country star Martina McBride, legendary dual sport star Bo Jackson, famed Eagles Coach Dick Vermeil, legendary actor Paul Sorvino and many, many more…

… and now including Mark Matthews of 42Freeway.com.   Who the heck let me in here?

There are several people that contribute regularly to the show, but the main force behind the show is Derek Timm of Small Bites (of course) and Bluejeanfood website.  Derek seems to handle most of the guest coordination, as well as is the lead guy to keep the flow of the show going.  There is no down time… my experience on the show was rapid paced commentary and guests, with very little “dead air”.

Also sitting in with us as a host was John Howard-Fusco who has his own blog Eating in South Jersey, but also is a journalist at the Courier Post, contributes to a variety of print and on-air media outlets, and also has written a book… A Culinary History of Cape May

A third on air regular is Donato Marino of D&L coffee services, who unfortunately could not make it to the show.

We had an off-air producer on the show also…  damn I forgot his name.  But that’s ok, I got Derek’s name wrong on-air.  🙂

Since this was my first time on the show (will there be more?), we had to go back to the beginning “When did you start this blog”…. and with that question I was off and running.  In the 10 min chat we discussed the Bellmawr Landfill and Bass Pro Shops, how I find stories, Taco Bell is more interesting than taxes, Washington Township has some new restaurants opened recently, the Wing Kitchen was very appreciative… and also, what are my plans this week for the site.

Overall I was very happy with it!  I stammered once or twice and I made a few mistakes…  I called Derek by his last name, and I said Macaroni Grill instead of Mozzarella grill… but overall it was a lot of fun.

Derek and the array of other guests (in the studio and calling in) made things move very fast.  Before the show started he gave some rules for how to jump into other guests conversations in a way that people aren’t talking over each other… but there was none of that on Sunday.  Things just moved too fast!

It was a very interesting show even beyond my 10 minute segment!  ha!   Following me in the studio was Jessica from the Morgan’s Pier/Craft Hall/Parks On Tap organization, Ettore who is opening a new restaurant “Rosalie” in the Wayne Hotel, and guests calling in were John Sierpout who is a firefighter in New York and also building a culinary reputation.. and lastly Fon who is from Philadelphia and is in this season’s Ink Master show.  They even close with an official Jackie the Jokeman Martling one-liner!   This is the real deal!

The Small Bites episode page does a much better job explaining who these awesome people area, and includes links to all their important web things.

Again.. thanks a ton guys for having me on.  It was a blast.  If you ever find a surprise opening in the schedule and need a fill-in, give me a call. I’m one town over!  ha.  But as I chat about in the podcast, I am continuing to grow 42Freeway into something bigger (for when I grow up) and maybe I am expanding into other forms of media.  While I have a face for radio (as you also joked), I am leaning more towards YouTube.  For today, at least.  Maybe both?  Maybe I’ll just get a beer instead.

Damn I wish I had thought to take a pic of us all in the studio… would’ve been a great article cover pic.

Link below is to the Small Bites Episode page.  Listen there!
Small Bites Radio Episode 112 – Web Stream and Podcast versions

This fall The Laughing Fox Tavern will be opening on the White Horse Pike in Magnolia on September 19th, taking over the massive and closed restaurant/bar that was most recently The Woodstone Tavern.

Chipotle and First Watch in Washington Township are Hiring! Job Links in Article

Two exciting new dining options for Washington Township are getting close to opening, and the are actively hiring right now! Chipotle and First Watch are finishing up construction on Egg Harbor Road, at the Acme Shopping Center. We don't have the date yet as to when they are opening, but it looks like Chipotle will be opening first. Job links in the article.

Perfect Crab: Cajun Seafood will be opening on Berlin-Cross Keys Rd taking over the former Tony Luke's location in Sicklerville/Cross Keys.  More specifically, it is the strip mall center which on the north end has Tractor Supply and Tilted Kilt.
This Post Has 10 Comments