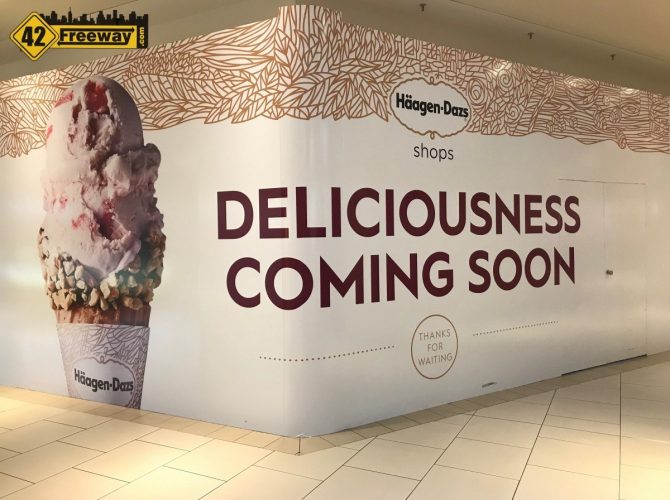 Häagen-Dazs Ice Cream is coming to the Deptford Mall, moving into a prime location in the center court section of the Mall, next to the Disney Store and just steps away from Starbucks.   The location was previously an ice cream store of a different kind… the “Dough Life” store closed in under a year, offering treats that looked like ice cream but were made from a custom cookie dough mix.  Mall social media simply says Haagen Daz is targeting a summer opening.

Häagen-Dazs is a well known premium ice cream which started out in 1961 in Brooklyn Heights.  Today the stores are owned by General Mills and Nestle, and also feature a variety of other frozen treat products such as ice cream bars, ice cream cakes, sorbet, frozen yogurt, and gelato.

The Deptford Mall store location has the “Coming Soon” construction walls up in place, and the Mall’s official Facebook page announced the new store about 2 weeks ago.  Hat tip to Marc, who emailed us and brought this to our attention!

Deptford MASSIVE Warehouse Project Planned Off of Rt 41. ONE MILLION PLUS Square Feet.

(Note: Overlay image at top of article was created by 42Freeway using…

Anytime Fitness 24 hour gym is opening in Deptford this week, and is located in front of the Home Depot on Hurffville Road. Full article has first look preview photos!

The Jefferson (Kennedy) Hospital in Washington Township is undergoing a massive $205 million expansion, with the key feature being a new 7 floor patient tower with 60 private rooms (and room for 60 more). The Phase 1 eight level parking garage has quickly risen at the far edge of the property, and is targeted for a spring 2019 opening.
This Post Has One Comment