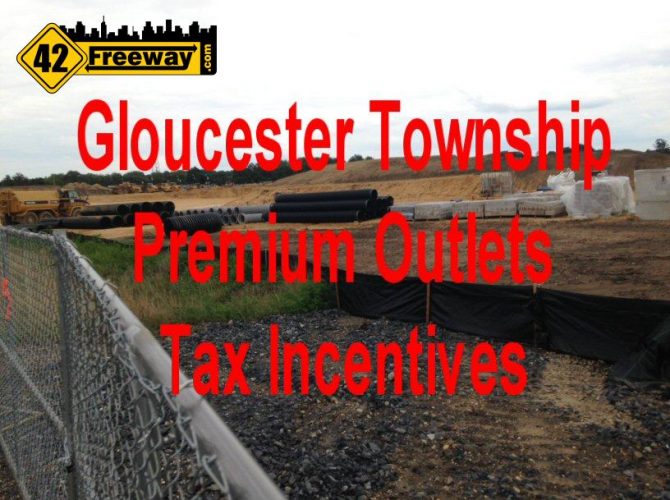 My question/statement “My Mayer, I see discussions and articles in the fall about potential tax breaks for the outlets, but i dont see any clear final statement which I think is causing people to consider the worst scenarios”

So here is Dave Mayer’s 100% unedited reply regarding the tax breaks.

The outlets are getting the 5 year abatement not a longer pilot. They will pay the taxes for the land (of course much higher accessed then the farmland) but will get the graduated 5 year abatement on the improvements to the land. The schools receive their share. Please note that this is what any commercial development would receive. Not really anything special for the outlets.

So let’s break this down.

No special deal for the Outlets
First, as Mayer states… this is the standard Gloucester Township incentive program.   Nothing special.  Other businesses have already benefited from it, and I found references going back 7 years.  The program is not “secretive” by any means, and is clearly presented on the Gloucester Township website as a standard incentive package.

Schools get their cut.
An outlet mall brings zero new students to the district, but will bring millions of new tax dollars to the school district.

Breaking down the numbers
Land: taxes on the property are 100% paid at full rate… and not at the farmland rate.

Improvements:  The discount percentages add up to 3 years of no taxes in the first 5 years (but as stated its spread out)

And some people commented “And after the tax breaks, the mall will close”.  But seriously, no one spends $100 million dollars on a property with the goal to close in 5 years.   Ridiculous.

So yea, other media outlets have put a price of the Outlet at $100 million with an assessment of $55 Million.  Based on a 3% overall tax rate… this new project could bring about $1.5 Million in taxes… each year!

Yes, its only $3 million over the first five years, but if the property were left as farmland how much would it bring in taxes?   Tens of thousands?

Of course like all property taxes, this gets diced and sliced.   County Taxes, School Taxes (local and regional), and Town Taxes.

But the strong supporters of the schools should be ecstatic about this deal.   I couldn’t quickly break down the percentages (I will find later) but based on other town numbers, this could be a 1/2 million dollars going into the Gloucester Township School District and the Regional School District each year… without adding one new student.

My goal with the web site was to present new things and experiences, and keep my own opinions out, but solely based on financial sense this seems like a good deal for Gloucester Township.

Actually, my heart still belongs to Bellmawr, and if something ever happened with the Bass Pro Shops project, this seems like a pretty good deal for that landfill property and Bellmawr too (not to mention Deptford which actually is home to 1/2 of that Bellmawr landfill, but I digress)

I don’t have time to write more now, but I look forward to everyone’s comments.

Remember I am just informing the people… I am thick skinned but I feel that I am the first one to really spell this deal out to people  so don’t shoot the messenger too much.  🙂

Note: This article was updated within an hour of posting to adjust assessment values, based on updated information at Newsworks