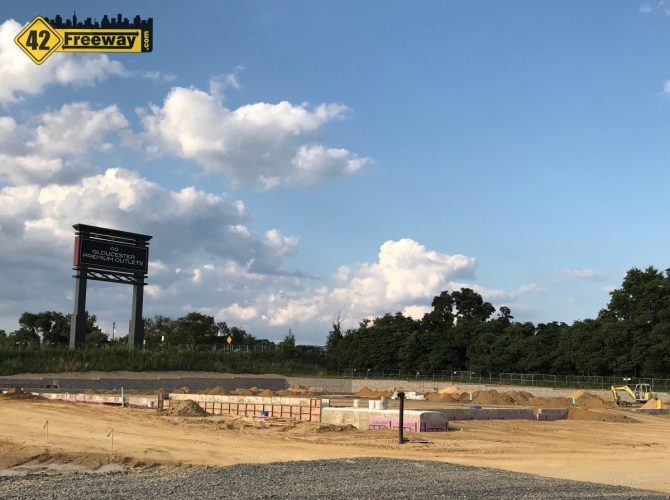 The battle of the 42Freeway shopping titans is elevating to the next level over the next 18 months, as both the Deptford Mall and Gloucester Premium Outlets will both be bringing in large entertainment venues (serving food and alcohol). So first let’s get this straight, as I see people getting this wrong every day in the 42Freeway Facebook page:

The confusion about what is going where stems from many rumors and media reports a few years ago that Dave and Busters was going into the Mall.  This obviously is not happening.  Dave and Busters is going to the Outlets.

Both venues offer arcade games, beer and food as core parts of their offerings… Dave and Busters is an American Based firm that seems to target families and older patrons, and Round One is a Japanese owned company featuring Japanese based games, Karaoke and bowling… and it seems to target more towards family and youth crowd.

If you are following along, yes it is expected that the Deptford  Mall will have bowling lanes!

So the Dave and Busters project has official media releases where they say they are targeting an April 2020 opening.  42Freeway broke that initial story back in May 2018. 42Freeway has now learned they are actually targeting a March 2020 opening (more on that later).

But there has been nothing official from the Deptford Mall regarding Round One.  They haven’t even acknowledged they are coming.  We broke the story when a reader pointed out to us the Deptford location was listed on the Round One website.

That being said there is construction activity taking place at both locations.  At the Outlets the site retaining walls are in place and the Dave and Busters outer wall foundation has been poured.  Over at the Mall, significant construction is taking place in the parking lot, building entrances, and the interior.

… and the Deptford Mall Round One location is listed as Spring 2021 Opening.

And that would be a full year after Dave and Busters.

Wait… I first want to thank a Round One fan on the internet who posted the translation of the earnings report, which I then found.  I also double checked the translation as I work with someone who is fluent in Japanese and they pointed me to the line in the PDF where it was printed (it even translates in Google Translator!)

Anyway… a full year.  In the battle of the 42Freeway Shopping Center Titans… that year can be a big deal.  Area consumers are very familiar with Dave and Busters and will be very curious to see what the new incarnation is like… and meanwhile Deptford will not have their entertainment venue open… which leaves that end of the mall just a little quieter. (Two other changes at the Sears end of the mall.  One positive, one not… a post tomorrow)

Also important to note that Deptford will not be the only area location for Round One.  They will be opening this spring at the Fashion District in Center City Philadelphia, which is the old Gallery mall.  The Gallery has gone through and extensive remodel.. it’s basically a new mall, and it will start opening for this holiday season although not all stores will be ready for this year.

Part II  on Friday: 20 Questions with a Dave and Busters Executive

Back in May when 42Freeway posted about Round one, on our Facebook page a gentleman made a couple comments which caught my attention as someone who knows what they were talking about… I picked up on this, did a little bit of Googling, and a few direct messages later I find out he is an Executive with Dave and Busters who is very closely involved with store operations… running and opening new stores.  As a bonus… he’s originally from the Philadelphia area and owns a summer house at the Jersey shore!

So he knows the business, he knows our area… and he agreed to a “20 questions” style exclusive interview with 42Freeway!   It has already taken place and I’ll be writing it up later tonight and posting on Friday.

What other media outlet in the area is translating Japanese Investor Reports and talking to Corporate executives to get to the answer… and it costs you nothing?!  We put the FREE in 42Freeway!  ha!  ugh.. the heat is getting to me. Dollar General continues to march their troops through South Jersey with the development of a new Pine Hill store on Berlin Cross Keys Road near the Turnersville Road. If you are unfamiliar with the area, it is close to Overbrook High School (down Turnersville Road), and is the start of the area known as Albion. Readers have reported that clearing work has already started on the lot.

An alert reader pointed us to a new Dollar General being developed within the existing Commerce Plaza on Blackwood-Clementon Road in Gloucester Township.  The location is the more recently remodeled strip mall behind TD Bank and Dunkin Donuts (Lumpy's BBQ is also located there). Dollar General will occupy the right side of the building, which has an angled corner entrance,

Primitive Rage Room Opens at Primitive Axe Glassboro. You Get to SMASH THINGS!

The popular Primitive Axe location in Glassboro is now offering one of the latest "Oh we have to try that" things... RAGE ROOMS! Simply, you get to smash things. With hammers. Sledge Hammers. And crow bars! This could be South Jersey's first location for something that is popping up around the country.
This Post Has 3 Comments