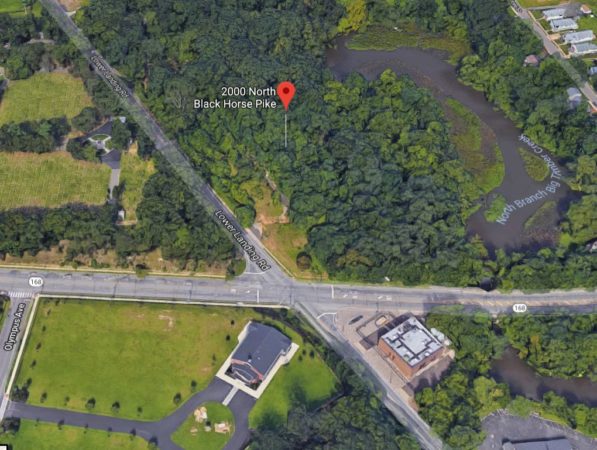 The Gloucester Township Council and Planning Board meeting minutes have multiple references to a proposed project to build a 73 room Holiday Inn  Express and Suites hotel on the site of the old Black Horse Motel (Black Horse Pike), in the Glendora section of the township.  According to township Planning Board agenda documents, the property was discussed at the November 28th meeting.  (PDF of agenda)

The property is proposed as a 4 story building for the 73 rooms, and they have also included an option to add another 16 rooms at a later date, making it a total of 89 rooms when fully developed.

Location : Eddie and the Cruisers

The location of the property may be known to many, and it may be consider a unique location for the hotel… but I can see what the developers are shooting for.

The Black Horse Motel property has sat vacant for decades at the corner of the Black Horse Pike and Lower Landing Road.  I remember it from the 80s as a small 1 story “old school” style motel, which was demolished decades ago.  The iconic motel sign remained long after, proudly marking the property as the final resting place of the original motel.

This motel is also said to have been included in the pop culture favorite movie “Eddie and the Cruisers“.  While the movie box office number barely covered the production costs, it spawned a Springsteen style music hit “On the Dark Side” and features movie locations throughout South Jersey including Wildwood, Vineland, Ocean City and Atco!

At the intersection to the 4+ acre property is.. .well, not really too much.  And many would think “Why build an 89 room hotel here?”   Of the 4 corners in the intersection are;  Two cemetery properties, a sewage pumping station, and then the hotel property.  And the area immediately surrounding the proposed hotel is simply a mix of commercial buildings and residential (although there really is no residential properties in close proximity)

My thoughts are, the real benefit of putting a property here is it is basically half-way between Rt 42 AND the Turnpike/295… with all of these major South Jersey roads less than 2 miles away from the proposed hotel location.  Actually, there are TWO Route 42 exits close by with both the Black Horse Pike (Howard Johnson’s) and Lower Landing Road (Small Commercial Park) about one mile away.

One thing that I wonder about is, if the developer is going for 89 rooms total… why not go a little larger and apply for the “free” major bonus you can get with 100 rooms in a new hotel?

What I am referring to is, in the state of New Jersey there is a law that allows new construction hotels of 100 rooms or more to apply for a special hotel liquor license.  The new Courtyard in Deptford which opened this year has taken advantage of this.  Mount Laurel has about a dozen new liquor licenses from the hotel law.   This is significant because the current New Jersey liquor license laws make it very difficult for booming commercial towns like Gloucester Township to add additional liquor licenses, as they are based on population.  In many towns the pricing for available liquor licenses have shot up to over $500,000 and even a million dollars.  It’s my understanding that a hotel liquor license will always need to be attached to the property, but it is still an exciting option to help offset costs of the hotel development.  The Courtyard at Deptford property is using the license directly in the hotel lobby for a small bar that seems is solely targeted at hotel guests.  Whereas other hotel bars such as many of the ones in Mt Laurel, have built full national chain restaurants which are attached to the hotel.

To be clear, they are not going for the hotel liquor license.  They can’t at 73/89 rooms, but for just a little more extra room development they could apply.  There of course could be many other reasons, such as lot size.

We’ll have more news as this project develops.