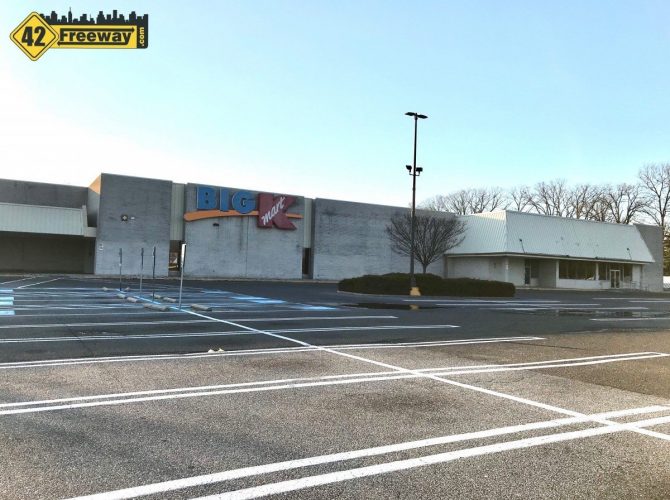 I don’t think its been more than a year since the Glassboro K-Mart closed at the Collegetown Shopping Center on Rt 47 and already the Glassboro property has several tenants signed to take over a “split” K-Mart building, including new “pad” site tenants located in the parking lot!

Unfortunately we don’t have all the details on the tenants… and not the specifics on the large tenants moving into the K-mart building.   But we do have information on the new “pad” tenants.

The most interesting part is the K-Mart building will be split into THREE main front facing tenants and a fourth smaller tenant space in the back corner.  Leasing agent documents found online (Metro) indicate that all three of those larger stores are leased, and one clearly is indicated as “Signed Grocery Store Lease“.   The Metro documents show that store size as 25,000 sq ft which puts it into a smaller specialty grocery category but still seems too large for the “Aldi” type stores.. but it also seems the K-Mart building will be made slightly smaller.

The October Zoning Board minutes state that the 107,000 sq ft K-Mart building will be made 10,000 foot smaller by removing the front facade and rebuilding it back further in line with the rest of the shopping center.  That familiar K-Mart retro blocky entrance will be gone and replaced with three distinctive stores.  This is a process similar to what was done with Brooklawn’s K-Mart.

I did reach out to leasing agents and Brixmor, and received a reply from the Brixmor Corporate office who said “We can’t confirm at this time”.. so what I write below is unconfirmed

For the K-Mart Building I found the following descriptions.  None of these actual retailers are known.

New Pad Sites: Chase Bank and Chipotle planned plus others

The Glassboro Zoning minutes offered additional details on two of the tenants coming to the parking lot area… this is probably because for the Zoning board, knowing the tenants in this new construction can help them understand the full usage (drive thru lanes) and trash disposal requirements.

There will be three new buildings with what I interpret as a total of 5 smaller tenants.

We are not aware of the full development dates, but I’ve been told construction fencing is now up on the property

So there is some exciting news for Glassboro in its still thriving Delsea Drive commercial district… but we don’t know all of the details.

Of course as we find things out we’ll post updates.  Looking forward to reading comments from readers (facebook) about what they know.  I heard one rumor on the Grocer plans but without confirmation I don’t want to publish just yet

Additional store opportunities remain!  Reach out to Metro Commercial (link below) for details

Clementon Park CONFIRMED CLOSED! 2020 Opening Seems Dependent on Being Sold. Other Premier Parks Possibly for Sale But No Interest Yet For Clementon?

Based off of our initial findings, KYW Newsradio has reached out to Clementon Park owner Premier Parks and has confirmed that Clementon Park is closed, and it seems unless a buyer is found they will not open in Spring 2020. Screamscape.com is reporting the last four parks owned by Premier are up for sale, but no current interest in Clementon

The mostly forgotten large Bradlee's shopping center on the White Horse Pike in Stratford has been sold, and up first is a Royal Farms, a Dollar General, and much bigger plans for the remainder of the 22 acre property.
This Post Has 10 Comments