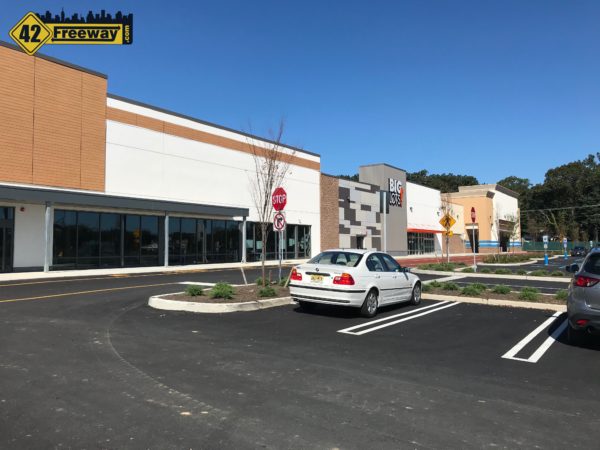 Lots of things happening in the Delsea Drive Commercial Corridor of Glassboro!   As we previously reported, the former K-Mart building is being transformed into 3 new major tenants; LIDL, Big Lots and Ross Dress For Less!  The first store scheduled to open is Big Lots, which is relocating from across the street.  They posted an opening date of October 1st.

Big Lots sits in the center of the completely redesigned storefront of the former K-Mart and is the first to open.  From our perspective, the next in line to open is the Ross store (on the right end).  While the Ross signage is not up, it appears the interior construction is complete and workers are readying the store for an early Fall opening. They are advertising for positions.

The store with the longer lead time… and probably the most anticipated… is LIDL grocery.  We peeked into the windows today and they still have a lot of interior work to do.  Metal framing studwalls can be seen, unfinished floors.  It’s possible that this portion of the construction can move fast, but after that all of the store shelving, refrigerators, bakery ovens etc have to be brought in… as well as the merchandise.  We think and hope they will be open for the Holiday season, but can’t find any dates from LIDL

In the parking lot of the same Collegetown Shopping Center is a new Chase Bank, which is rapidly taking shape.  The core structure of the building is standing, and workers were busy on a nice fall Saturday finishing up the non-brick portions of the facade.  Chase is on a growth spurt in our area, increasing their retail presence.  They have another new location in Cherry Hill.

Also planned for the front “pad” sites is a Chipotle restaurant.  We saw additional construction taking place near the Saladworks building, and can only assume that it is the Chipotle location.   Not too far away in Washington Township, another Chipotle location opened just this week.

Kudos to the folks at property owner Brixmor who have done an amazing job in quickly transforming the closed K-Mart with some quality retail tenants, and then as a big bonus… a new Chase Bank and Chipotle!  Brixmor also owns the Washington Township “Walmart” Shopping Center, which has also seen a number 0f new tenants this year!

We heard this news from one of our readers, so we stopped by today after checking up on Big Lots/LIDL/Ross…  and yes it is true; Glassboro’s Save-A-Lot store is closing.  A simple sign on the window announces they are closing and the last day is September 30th.  The are directing shoppers to their other location on Blackwood-Clementon Road.

The Glassboro Save-A-Lot is adjacent to the property which was previously the bowling alley.  The bowling alley was demolished to make way for additional parking for Matt Blatt dealership, but a real estate sign indicates they are looking to develop it?

We don’t know the details of the Save-A-Lot closing, but can only assume that the upcoming opening of LIDL played a role…especially when this area also has an Aldi and Shop-Rite!