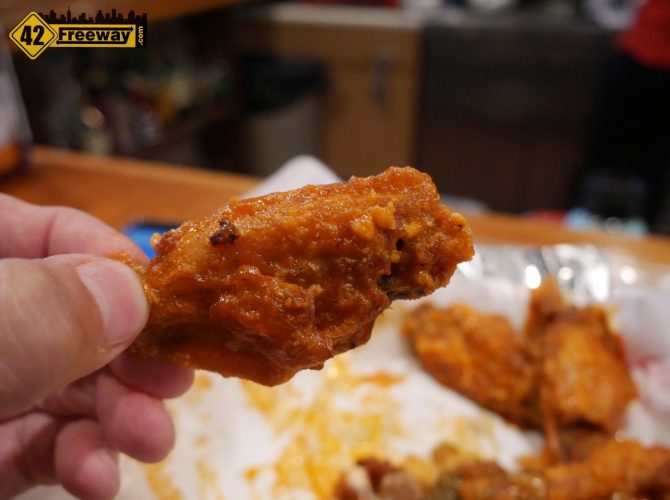 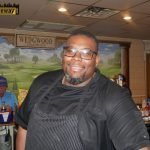 At the 42Freeway Compound we regularly marathon watch The Food Network, and it’s hit show “Chopped” is in heavy rotation…  so I was happily surprised two years ago when I learned that someone from our area, Tim Witcher, had successfully won and became a Chopped Champion!  And my excitement moved to another level when I heard he had opened a chicken wing eatery “The Wing Kitchen” right in Washington Township just a few miles from my house! 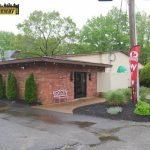 The location is an interesting one!  The Wing Kitchen is located within Divot’s Bar at the Wedgewood Country Club!  Chances are you’ve seen a portion of the Wedgewood course while driving down Egg Harbor Road, as the course travels over the busy roadway… but to get to the Club House you have to make a turn at Hurffville-Grenloch Road and head down to the course entrance at 200 Hurffville Rd.

Divot’s Bar is still “Divot’s” and they do offer the traditional golf bar fare.. but the talk of the place is Tim and his Wing Kitchen, who opened it in partnership with Roger Baldacci.  Everything about the wings and all of his food offerings are made fresh right there in the building… including the delicious sauces! 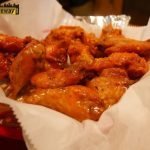 I made my own sampler of three different sauces… and while I favor a traditional mild/medium buffalo wing sauce.. .the garlic Parmesan may have been the winner for me as it had a really good balance of garlic AND parmesan cheese!  It sounds crazy, right?  But seriously most garlic parm sauces are 99% garlic and 1% Parmesan and Tim’s was a perfect balance.

The sauces are soooo good, you can’t get Blue Cheese or Ranch Dressing.  Tim feels all the flavor you need is in the sauces and the chicken!

The wings were cooked perfectly.. they held together in the bowl and as I picked them up, but as soon as I took a bite the chicken meat just fell off the bone.

Wings aren’t the only thing on the menu as Tim and the Wing Kitchen offer Buttermilk Fried Tenders, Fried Cauliflower, fresh cut fries, coleslaw and more. 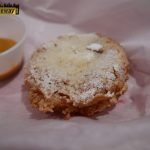 A big surprise was when Tim brought me out a fried donut!  What?!   I’ve never had one… and it was awesome.  Served with a Caramel dipping sauce… literally too good for words.

If you want to try out the delicious Wings, Tenders and donut from The Wing Kitchen you don’t need to be a golf member.  Wedgewood is a public course and you can walk right into Divot’s (which is the smaller building next to the Clubhouse), grab a beer and order wings!  There are three sections to the building… the center room features the larger bar, the front room is set up as a sit down dining/cafe area, and the back room looks like it’s perfect for small events.   You can also order to go from the Wing Kitchen and they recently signed up with DoorDash for fresh delivery!    (Note: the larger clubhouse has larger banquet rooms available) 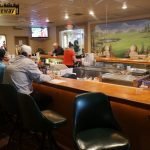 I stopped in on a very rainy Cinco De Mayo and was surprised to see there were some hardcore golfers in Divots, who had just come off the course.   A quick shout out to bartender Brittonie Lee who reached out to me about The Wing Kitchen, and to all the guys at the bar who were very friendly and great to talk too… it was enough to make me want to dust off the clubs and whack some holes into the grass.   We spent a fair amount of time talking about area restaurants and bars, and one gentleman declared his wife a wing expert, so if I ever do a wing tasting shoot-out she’s a definite judge.

Despite the rain it got fairly busy at Divot’s and the Wing Kitchen.   As I mentioned, Tim was able to come out and say hi to everyone at the bar, and he and I chatted for a bit.  He’s a really nice guy with a lot of talent!  I don’t think I mentioned, Tim is a school teacher for Camden County Vocational School who loves working with students, and then when you consider the schedule of a school teacher (with most of the summer off) and how the golf season picks up in the summer, you start realizing that he must also be pretty smart too!

The Wing Kitchen is open every day except Mondays (I believe Divots and the Golf Course are open every day) and have fairly late and convenient hours!

Update: Tim was recently on the Small Bites podcast.  Check it out here!