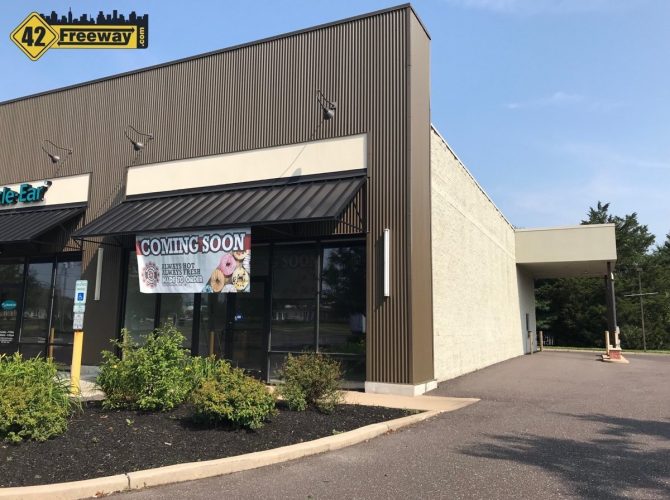 Factory Donuts started out as a Philadelphia based, cake-style custom crafted donut shop, and they are expanding their presence with a new location in Washington Twp.  The new store will be located in the Fries Mill Plaza, in the right side of the building which at one time was home to a Rite-Aid.   The old drive-thru window is still there, and 42 Freeway has a message in to Factory Donuts to see if they plan on using that window for Donut orders.

To make the location even clearer for many, it is directly across from Verchio’s Produce!

A “hat-tip” to readers Kenny VP and Dean J for bring this to my attention (the store has an announcement banner on the front.  Not all of my stories require Sherlock Holmes investigative efforts! ha)

The Factory Donut site states that the founders have 20 years experience owning franchises, and wanted to move into owning their own concept.  They have a Mayfair Philadelphia store open, have announced 4 locations are coming (including Turnersville), and have 13 more in development!

The donuts are made to order “cake” donut, handcrafted by dipping them into your choice of icing, and finishing with a variety of toppings.  They also serve their own brand of delicious coffee.

Heather’s passion for cooking and baking for their family and friends led her to start making homemade desserts. One of her most complimented desserts was the fresh, hot, homemade donuts. Each and every time we made these donuts for our family and friends the reaction was always the same, “WOW, these are delicious, when can we come over again for more donuts”? They decided it was time to take their skills they had developed from operating successful franchises and create their own concept from inside their home to the city of Brotherly Love, Philadelphia.

This part of Washington Township is in the start of a growth spurt as nearby the new Washington Square development is mostly open, bringing new residents to the area.  These new consumers can jump start commercial projects in the area, such as PetCheck, new stores planned for the theater area, and a possible Royal Farms.

Not too far from the new Factory Donuts location is Mama Buntz, located in the PJ Whelihan’s center next to Jefferson Hospital.

ALDI coming to Bellmawr and Woodbury!!!

Breaking News! Today (March 27) Aldi completed the purchase of the Bottom Dollar Food locations.... and they've announced that 30 Bottom Dollar Stores are being converted over to ALDI .. and BELLMAWR, Woodbury, Glassboro and more made the cut!!

What’s Going On With The Deptford iHop? (Video)

What happened to the Deptford iHop? Back in 2016, 42Freeway.com reported on the proposed iHop restaurant to be developed in Deptford next to the very popular Chick-fil-A (and in the Lowe's Home Improvement parking lot). Three years later there are no signs of development. Video in the article.

The old local bar The Spread Eagle Inn is gone... and in its place a completely new bar "The Spread" is taking its place.
This Post Has One Comment