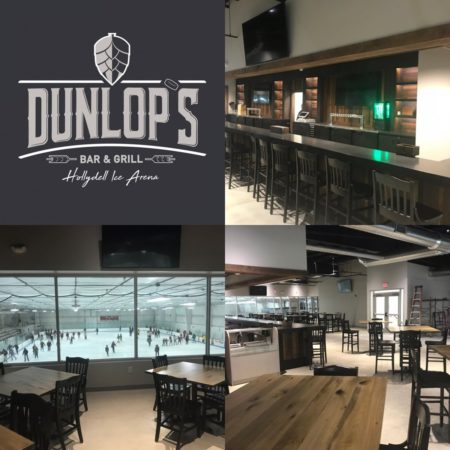 First reported here at 42Freeway back in July, we now know that the new BAR and Grill at Hollydell Ice Rink in Sewell will be called Dunlop’s… after iconic Slapshot movie character Coach Reggie Dunlop!!  They are working on final town approvals, and shooting for an opening the weekend of January 18th!  The liquor license comes from Ruby Tuesday who has held it for many years but never built a restaurant in Township and it was acquired by Hollydell in July of 2018.

The bar and grill is all new construction on the second floor between the two main full size rinks, with plenty of large windows offering bar patrons a wide view out over BOTH of the rinks!  There is a new stairway AND elevator right at the facility’s front entrance.  The rebuilt second floor actually includes several areas; a casual and modern concession area, kid’s lounge and arcade area, and the bar… which itself is large enough to support a large number of bar stools and MANY bar tables.  I don’t want to oversell it, but I’d call it “extra medium” in size, ha…definitely not small…  for example it’s bigger than Amanda’s Bar in Gloucester Township.  And then behind the bar area is an all new kitchen area.  EVERYTHING is new!

And still to be added in the bar area is a large fireplace!

I visited Hollydell rink on Saturday January 5th, and General Manager Jim M. gave me an exclusive tour!   The second floor remodel really is awesome and will have everyone in Washington Twp talking (and visiting) regularly, but that’s not the only changes completed, in progress and planned.

The front left bump-out of the building most recently housed a fitness gym, and VERY recently Hollydell completed the installation of a new third Ice Rink… 2/3 size.  This is a more private room, perfect for team practices and private rentals… and they are starting new small-team leagues including a 3 on 3 over 50 league.

Around the right-side of the facility, Hollydell is adding expanded locker rooms on two sides of the rink by bumping out the walls.  10, 12, 20 feet?  I’m not sure as I didn’t measure (ha!) but it’s no small addition… And it’s not just lower levels…  the new locker rooms are TWO FLOORS of the front and right sides.  The new locker rooms will provide more comfortable accommodations for traveling teams and in an awesome recognition of the progress of the sport, Hollydell will be offering dedicated female locker rooms… where combined men/women teams can come into town and have their players provided the  best and most comfortable accommodations.

Still to come are additional rink and building improvements (for all three rinks).

I have friends that are “hockey” families, and I follow along in social media, amazed at the commitment they put into their children being able to travel around the country in support of their sport activities.  While my connection is closer to Ice Hockey, the same dedication is taking place in figure skating… and all of this means there is an entire family culture of weekend long events and travel, with mom and dad dedicating themselves to the growth and support of their children.

So honestly mom and dad spend a lot of time just “hanging out”.

So that being said, a large arena facility with really nice food and beverage accommodations can really elevate it’s focus in regional events and increase the number of event bookings.

Not to mention special shows and performances… very talented performers who maybe don’t reach the level of Wells Fargo Center in Philadelphia, but have enough of a draw to travel to metro areas all around the country.

Not to mention leagues…

I didn’t take perfect notes on this, but I remember being very impressed by how extensive the hours for food and the bar are planned to be.   You may not be aware, but an ice rink is an 18+ hour business.  Teams are practicing as early as 6am (or earlier?!), and other teams and adult leagues are playing past midnight.

With that being said, I was told they plan on having the bar open until 1am to accommodate the late adult leagues, and Hollydell also plans to offer breakfast for the early morning leagues.

All that being said, here is a photographic view of the facility and changes…