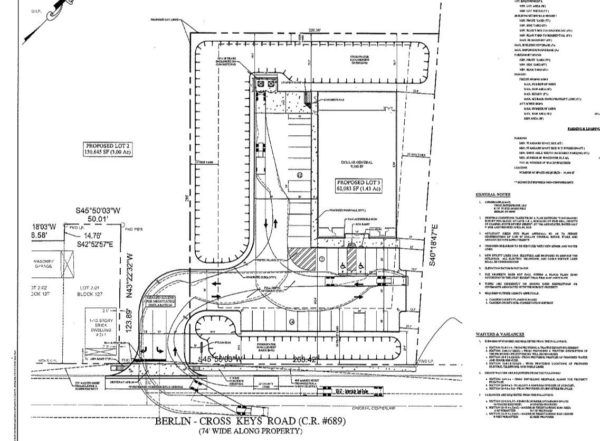 Dollar General continues to march their troops through South Jersey with the development of a new store on Berlin Cross Keys Road near the Turnersville Road intersection.  This project was approved last fall by Pine Hill and Camden County planning boards.  If you are unfamiliar with the area, it is close to Overbrook High School (down Turnersville Road), and is the start of the area know as Albion.  Readers have reported that clearing work has already started on the lot.

The address was listed as 207 Berlin-Cross Keys Road and is an empty lot.  There is a small house in that area also, and it appears the new development will cut around the house property based on a review of plans submitted to Camden County.

Dollar General and Dollar Tree have both been increasing their presence in the area.  For those who aren’t clear between the two, Dollar General is a general house products store similar to a drug store product selection without the pharmacy, and Dollar Tree is a “everything is a dollar” store.