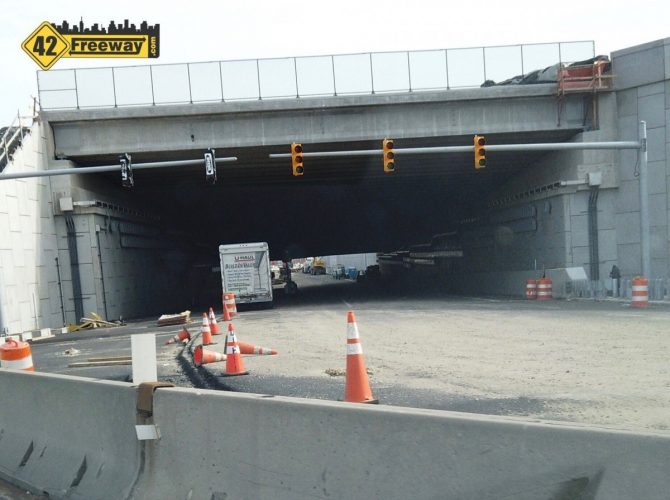 If you haven’t seen the tunnel that was built heading up 295 north at 42 (as part of the massive Direct Connection project) we cover it in our long videos on Direct Connection and Missing Moves.  If you don’t want to skip through an hour and a half of video (Ha!)…  simply, to facilitate how traffic from three directions moves into 295 North, the project includes a tunnel, which is needed to allow the inbound roads (heading up to 295) the proper safe road angles

The NJDOT press release goes out next week.  Only 42Freeway.com has this information today.

42Freeway communicated with Steven Shapiro of NJDOT who explains that next weekend (February 1) starts the process of realigning roads heading onto North 295 to go through the tunnel!   After next “Superbowl” weekend it seems 42North to 295 traffic will be using the tunnel.  Well let’s step back a minute and tell the story which Mr Shapiro shared with 42Freeway.

Final Construction 42N-295N:  While for the next couple years 42N-to-295N will go through the tunnel, in the final construction that route will travel ABOVE the tunnel, via a new ramp which will connect to the overheard 295 road!  See below from NJDOT video (and my recap)

What are the traffic lights?!

The conversation with NJDOT’s Mr Shapiro came about because so many readers wanted to know “What are the traffic lights on the new highway heading into the tunnel?!”

Simply.. they are a safety measure and not expected to be used in normal operation.

The traffic signals that have been installed prior to the covered roadway are considered to be a safety measure. The signals are not intended to indicate whether a lane is open or not. They normally will display a steady GREEN, unless there is an incident in the covered roadway. If there is an incident, the display would be changed to RED in order to stop traffic and allow emergency responders to clear the incident.

(Thank you Mr Shapiro of NJDOT for the extra clarity, and extra information!)

I’ll add, if you realize that the two traffic lanes coming into the tunnel are entering on an angle… consider if something happened inside the tunnel… even something as simple as someone running out of gas and stopped on the lane…  the traffic coming in at 50 mph on the approach bending road won’t have good visibility to that disabled car.  With the traffic lights in place, drivers can be signaled in advance of entering the tunnel “This lane is closed”

The Bellmawr Fire Department posted on Facebook that they were able to spend several mornings working in the tunnel, to understand what they need to do to support incidences.

We’ll have more on the future contracts and plans.. but yes, this is all heading towards a key significant part of the project.. the building of the main 295 overpass which will go from the tunnel area, over 42/76 and the Browning Road bridge, and connect back on the ground behind the Bellmawr Park School and Little League Fields.

From 55 North you can see the land clearing and construction taking place deep behind the new Inspira Hospital on Rt 322 in Mullica Hill.  This development is a new County Road called 641 Spur, which will connect Rt 322 at Inspira with Ellis Mill Road in Glassboro.   Basically they roadways are two adjacent exits on Rt 55, and this new road will give more direct access to the hospital from the South.

Deptford’s Burlington Store Will be Open for Holidays

Well this is impressive.  Just a few short weeks ago we noticed…

Deptford's own John Eichenberg has just opened the Turnersville location of Crab Du Jour Xpress!  Located right on the Black Horse Pike / Rt 42 in the former Wendy's building.  They are offering a variety of seafood items (and other) from fried baskets and po' boy sandwiches, to full seafood boils!  The core of this post is Mark's experience video... "Unboxing" and eating!
This Post Has 7 Comments