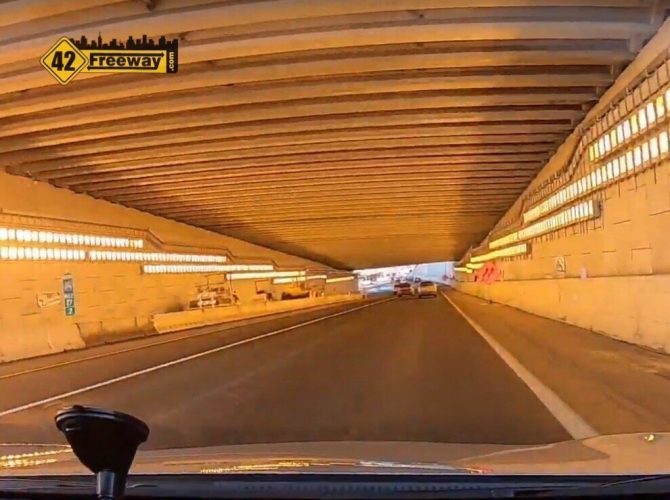 The video below is a ride-through of the newly opened covered roadway (tunnel) which is part of the massive Direct Connection 295/42/76 interchange rebuild.  We posted first about this tunnel opening last week, but in short summary… for those traveling North on Route 42 and are heading towards 295 North, as of Sunday morning you are routed into the tunnel!

In a few weeks, traffic coming from 76East to 295 North (from Philadelphia  direction) will also be routed into the tunnel.

Currently this means the traffic coming in from 42N reduces down to 2 lanes from 3.. with the middle and right lanes merging.  From my observation I feel that there is only room for one more lane and I am speculating that the 76E traffic lanes will also reduce from 2 lanes to 1.  We’ll see in a few weeks

By having both roadways going through the tunnel it gives construction crews the ability to start working on the main overhead 295 elevated roadway and connect it the existing route 295.

In the final development the tunnel will only be for the 76E (to 295N) traffic, and the 42North traffic will go up to the elevated roadway.

We explain in the prior post on this tunnel, that the traffic lights are in place to alert oncoming drivers if there is a problem with traffic in a lane.  Normally they will be green and if there is an issue in a lane, NJDOT can turn to red.   Consider that in this temporary configuration (from 42N) it is a somewhat sharp and upturning bend, so if there was a problem  in a lane the oncoming drivers would have limited visibility… and the traffic lights are to give advanced indication of problems.

I was hoping to get to this video on Sunday ahead of the morning commute, but Mrs 42Freeway and I were enjoying a weekend at the Ocean Resort Casino in Atlantic City (Thank you Q102!).  A really awesome casino and resort complex…  HUGE doesn’t begin to describe.  More on that later!

The video has two segments… getting right into it, starting with the tunnel  Then a second version where it starts much earlier (at the Bellmawr Wawa entrance)

Filmed with the new Go Pro Hero 7 Black action camera, with enhanced stabilization!   Hand held… it’s cool to see how the camera maintains the main image while you see the motion in the car (from the moving dashboard)