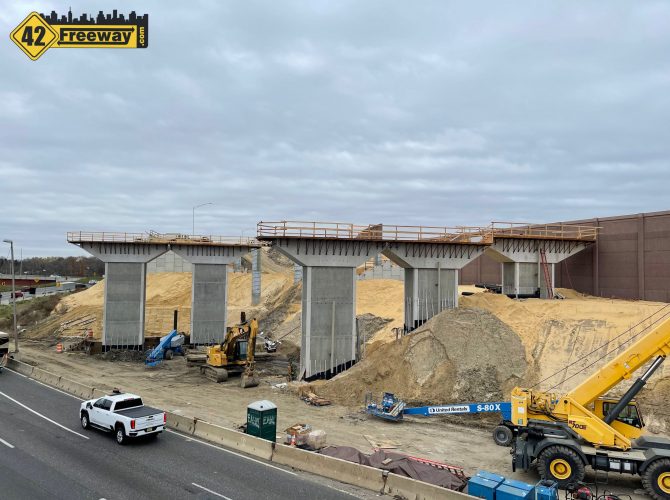 Mark from 42Freeway heads back to Bellmawr’s massive Direct Connect project, to review what has changed in the last few months (actually the last big post was in February!).  And yes, there are new things to talk about. This update is really a 7 min YouTube video (below) but we’ll highlight here in writing and photos the things in the video.

Back in early October we had a post and video on the second Missing Moves project, also centered in Bellmawr.  That post is here.  But read this one first.  🙂

What Is Happening: Support Columns

My first attempt at this update was probably a month ago… and for a variety of reasons I didn’t get those efforts online.  Five weeks ago or so when I stopped over at the Browning Road bridge area and looked out across to the core project area… I was surprised to see they had two core support columns up!    Was not expecting that!

And then a few weeks later, there were 5 columns up, all along the St Mary’s cemetery edge.

These columns represent the start of the overhead 295 direct connection core roadway.  The road that will “straighten out” 295 in that area.

Well it will still have some bends to it, but definitely this will smooth out the roadway from what is the “Al-Jo” curve today.

So actually there are three elevated roadways to be developed over Bellmawr’s Browning Road Bridge.  Route 295 North and South, and Route 42 North to 295 North.

Much further down closer to Creek Road and the Bellmawr Park School are two ramps that currently don’t go anywhere.

The larger one closest to Bellmawr Park School and the Little League field, is part of the core 295 elevated roadway.  And it will connect to 4 of the columns (2 North, 2 South)

The other ramp which is smaller, newer, and just looks steep and sits off to the right of Route 42 North… will be the route to 295 North. Drivers will be taken up and up to the elevated upper decks, and connect eventually with the road way above one of the existing columns, closest to the sound barrier.

Eh, watch the video down below if that doesn’t make sense.

A key facet of the project is to rebuild the Browning Road bridge, which of course goes over top of 42/76 and connects the two halves of Bellmawr.  It’s a key road for Bellmawr and everyone in the area.

So it’s not that it’s a new pathway for cars (as is the case for much of this project), but Browning Road will no longer be the highest point of the interchange… and with roads needing to go up and over Browning, the need to get the bridge rebuild completed sooner becomes even more important.

You’d imagine being able to use cranes to position large pieces of steel would be advantageous, and while I am no engineering major… I would bet not having another road over top of it would make it easier to maneuver cranes.

So before any of the larger overhead 295 direct connection roadway pieces can go in, they need to rebuild the Browning Road bridge.  Admittedly they still have a ways to go before they are putting in the roadway decking for 295!

And all of this Browning Road bridge work was scheduled to have started…  last year.  Maybe even before that?

Back in 2018 I timed it as “soon” for the start of the Browning Road bridge reconstruction.

…the temporary Browning Road Bridge superstructure and deck work will begin upon completion of a pier for the Route 42 northbound to I-295 northbound bridge, which will be a permanent structure. This pier work is going a little slower than expected, but should still be complete this summer. Once it is complete, work will continue on the temporary Browning Road Bridge.

And now it is 18 months later, and still no temporary bridge.

So our February 2020 post calls out the project is obviously going to take longer, and we had called out core component delays

We referenced a December 2019 NJ.com story which spelled it out even clearer…. the project is running 2 years behind.

So what was supposed to be completed in 2022, was pushed back to 2024.. which is just 3 years away… and honestly, it’s easy to cast some doubt on them making it.

Core components to be completed

So I will be reaching out to NJDOT for an update on the project, and I’ll report back with any findings.