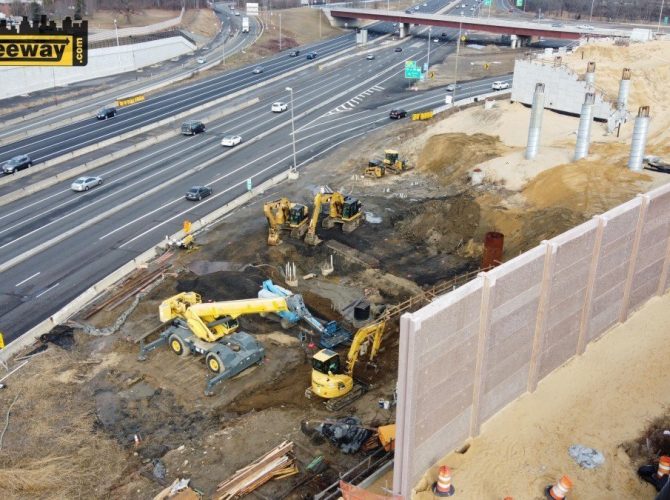 The massive 295/76/42 Direct Connect project which is centered in Bellmawr has seen significant progress over 2019… but as we got closer to the end of 2019, many felt like things slowed up, with the number of visible trucks and workers reduced significantly.  But NJDOT assures you that things are still moving… as we reached out to Steve Schapiro, NJDOT Deputy Director of Communications, to get an update.

Well let’s start with a short summary… work is still progressing on “Contract 3” of the four contract project, but current efforts are less visible to the public (such as foundations for elevated roadway support poles off to the side) and some of thos support piers are pre-cast off site, so things are happening but not seen.  Later portions of Contract 3 will have very significant visible aspects including the core mainline elevated  295 roadway!

Construction started in 2013 and the original press release planned on 8 years, ending in 2021.  The ending date appears to have slipped several years to 2024 (but much of the new roadway will be in use before then).  And the cost has gone up a few percentage points.  The delay is attributed to bridge pier work for the mainline 295 roadway needing a redesign.  Keep in mind that for this project they have to keep 100s of Thousands of cars moving through the roadways as they completely rebuild it. If they could’ve blocked all traffic while rebuilding I bet it would’ve been a 3 year project. Ha!

And before we jump too deep in, I just wanted to thank Stephen and his staff, and all of the NJDOT personnel for providing details to our questions for this post, and of course thank you to the engineers and construction workers who I honestly believe have a great plan and are doing a great job executing.  But then again, there’s still some questions!

Note: This article was published close to Midnight 2/5 and I woke up at 6:30am and did some updates to make it more clear that the delays are attributed to redesign work needed in the main support piers

What’s the Purpose?  A Quick Refresher

There are many problems with the original “evolved over decades” implementation of the massive interchange, and this Direct Connect redevelopment aims to solve them.  I’ve talked at length about the project and how traffic will flow, but here is a quick benefit.

Contract 3: Big Things Take Time to Do It Right

Stephen speaks to my question regarding “it appears that progress has slowed significantly or even stopped”:

“We are currently working on Contract 3.  The work taking place now is constructing the pier foundations for the I-295 mainline direct connection over I-76/Route 42, which is the main portion of this contract. The foundation work is below ground level and therefore less visible to the public. In addition, it is being done off of the roadway and therefore does not affect traffic”

So yes absolutely there is work taking place in one section of the roadway closest to the St Mary’s Cemetery Mausoleums.  Everyone can see the large elevated ramp which ends at the mausoleums.  This is the point where the completed elevated roadway becomes airborne via large support columns, and then the roadway will head over top of the Browning Road Bridge.

“Contract 3 began in April 2017 and is expected to finish late 2024. The main focus of this contract is completing the new bridge, which is the I-295 mainline direct connection over I-76/Route 42.”

That’s a very important of where we are now.. in Contract 3 the main goal in is to construct what will be the most significant and visible change to the roadway… the elevated 295 roadway.  Cars will be traveling over 50 feet in the area above Browning Road, above the lower roadway we have now, and the new mainline roadway will remove the need for the Al Jo’s curve for drivers traveling 295 South and heading on down past Bellmawr towards Delaware!

The Browning Road Bridge: 42Freeway Still Not 100% Clear on Date

So if you’ve been following along with us for prior updates, the glaring visible delay for locals is the Browning Road bridge.  The final plan is to replace that bridge but to get there, a temporary bridge needs to be constructed next to it to route traffic away as the current bridge location is rebuilt.

Back in May 2019 we had the following from NJDOT:

And the significant thing about that prior paragraph… so the delay is not the Browning Road bridge itself, but the 295 pier project has experienced delays and that needs to be completed before the temporary bridge can be installed.  And it seems that delay has been even longer than expected.  It was expected that the Bellmawr temporary bridge to start construction last summer, and by winter (this winter) we should be driving across it.  Then it’s another 18 months to build the permanent browning road bridge….which all adds up to the 1-2 year delay on the project.

In an article at NJ.com in December, it adds this quote regarding the delays “the schedule is off by about two years from a 2022 completion date because some modifications had to be made to pre-cast pier designs”

One rumor going around Bellmawr is there were delays with moving utility lines, but it seems that they current delay is focused on the pre-cast support piers needing a redesign.

One last comment on this section is there doesn’t seem to be a problem with the contractor’s efforts as the State just awarded them another large contract on another nearby project!  More on that in a later post!

Contract 3 Other Aspects and 2019 Successes!

Stephen provided us with this nice summary of what remains in Contract 3, which is a big one!

Other work that remains on this contract includes:

And he also follows up completed efforts for 2019

In addition, a majority of the retaining wall and noise wall between the New Saint Mary Cemetery and future I-295 northbound elevated section have been completed, and work has started on several bridge piers.

I’ll add that the previously mentioned ramp which starts on the right of 42 North also was predominantly developed in 2019 (well the way I remember it!)

To close out the NJDOT project update, a Contract Summary:

Contract 1 and Contract 2 are complete and much of the work in those contracts was more visible to motorists, such as replacing bridges and building new ramps. Installation of noise walls, retaining walls and two bridge abutments, already completed as part of Contract 3, was more visible then the current work on the pier foundations.

Later aspects of Contract 3, such as reconstructing the Browning Road Bridge, constructing the I-295 piers once the foundations are complete, and building bridge abutments will be more visible. As the project advances, NJDOT will provide information about any changes to traffic patterns.

“What about being able to drive from 42North to 295South, and vice versa?”    Well that is a second project called Missing Moves.   We describe it here, and will have another post on it very shortly.