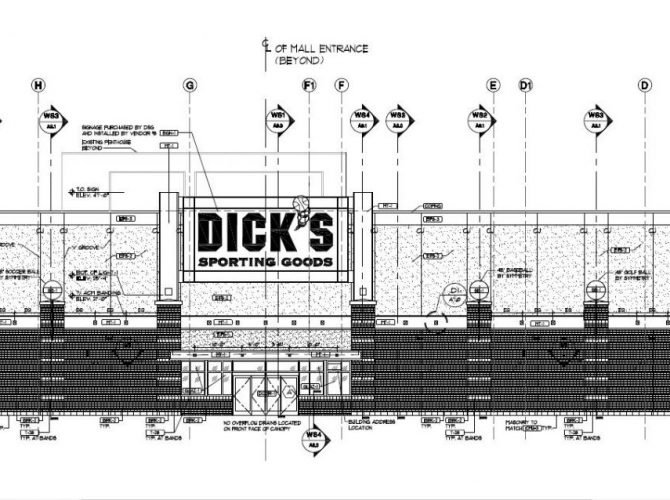 In another 42 Freeway exclusive, we’ve learned that Dick’s Sporting Goods will be moving across the street from it’s current Almonesson Road location, to set up shop inside the Deptford Mall… taking over the largest part of the Sears lower level.  Construction bidding is currently taking place.

The Sears store in Deptford Mall is currently in a closing sale and is expected to shut the doors before the end of the year.  Dick’s Sporting Goods has been a successful part of the Deptford retail landscape since 2000, when they took over the remodeled Almonesson Rd building, which prior to Dick’s housed Best Products.

A reader comment on the 42Freeway Facebook page reminded me that in the King of Prussia Mall, Dick’s also took over a portion of the closed Sears within the mall.

In the development plans for the new Deptford Mall location provided to 42Freeway, it seems the new Dick’s location is very similar to their current store layout with the addition of a second entrance.

Accounts for about 40% of Sears’ space

So if you are familiar with the lower level of Sears you’ll note that today there are THREE entrances.  What I’ve noticed in the blueprints is the new Dick’s location will not fill the entire lower level, leaving an undeveloped strip which runs along the outer wall on the same side as Ruby Tuesday.  (See the yellow square in image which denotes the outer wall of the Sears store).  In fact, the area on the first level remaining undeveloped seems to have the same depth as the current Ruby Tuesday restaurant with an access hallway.   This is pure speculation on my part, but it seems that mall owner Macerich is leaving that space open for future development of smaller stores or restaurants with direct outside access.

As expected, Dick’s will have an entrance facing into the mall (the existing Sears entrance) and the second entrance will be located directly across the other side providing a direct outside entrance  (facing Deptford Center Road / Christmas Tree Shops).

Nearby malls Cherry Hill and Moorestown have raised their “destination experience” by adding restaurants around the exterior perimeter of the malls.  Today Deptford Mall has Ruby Tuesday and Red Robin restaurants serving alcohol, and while more mall based restaurants would be an interesting addition in the future to Deptford Mall, available liquor licenses in Deptford are tough to come by.

And obviously there is an entire second level to the Sears store that is available for lease.   At this time we don’t know what is coming to the upper level or the strip of remaining space on the lower level.

We all knew that Sears at the corporate/national level has not been doing well, and Deptford has been running a risk (of Sears closing) for a few years but it seems overall the mall and it stores have been doing very well in a tough retail climate.  That being said, property marketer Seritage has been actively marketing the Sears location in Deptford for redevelopment for a few years, and early rumors had a new Dave and Busters coming in (they are going to the Gloucester Outlets instead).  My point being, I wonder if landing a new tenant in Dick’s Sporting Goods factored heavily into the decision to close the Deptford Sears store now.

Regardless of the reasons, this quick signing of a new tenant to start filling the void shows the strength of the Deptford Mall property.  Mall owner Macerich in their corporate marketing documents indicates the Deptford Mall has the highest foot traffic of any of their properties

So now on the Almomesson Road across from the mall, this will leave two significant empty buildings side-by-side, as the recently closed Toys R Us building currently sits empty.  We’ve been researching the Toys R Us property fairly hard.. and so far haven’t found any clues of activity.

Construction of Tim Horton’s Stratford Location To Start Within the Week According to Borough. Four Month Project
Last year we were all surprised by the news that Canadian Coffee and Donut shop Tim Horton's was planning on coming to the White Horse Pike in Stratford NJ.  This week the town of Stratford is boldly saying that construction will start within the week, and it will take 4 months to build. Article includes my rambling thoughts on Tim Horton's and coffee in our area.
42Freeway Tries the Gobbler Panzarotti from Tarantino’s. Only at Franco’s Place Westmont! (Video)
Over at Franco's Place in Westmont New Jersey, you can get a Gobbler Panzarotti... yes Turkey, Stuffing and Cranberry sauce in a deliciously crisp fried panzarotti, on and pour on the Turkey gravy! This is the Original Tarantini Panzarotti... Gobbler style! Taking the Thanksgiving "Season" to a whole knew level! We have a video taste testing tour at the bottom of the article... click the image below! And if you are wondering "what is a panzarotti?"... well it's a South Jersey staple and we explain that also!
Medical Marijuana Dispensary Proposed for Monroe Township. Black Horse Pike and Cross Keys Rd. Oct 22nd Planning
The October 22nd Monroe (Williamstown) Township Planning Board meeting will be reviewing a request to open a Medical Cannabis dispensary on the Black Horse Pike at the Berlin-Cross Keys Rd intersection, on the left side of the building which also houses Tires Plus.