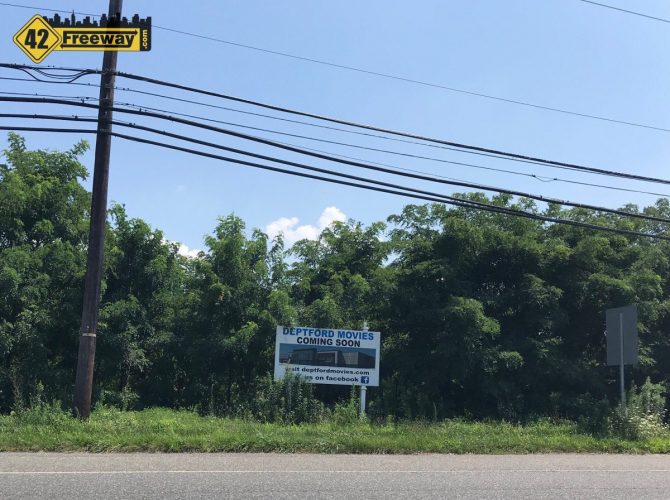 We’ve been following the Deptford Movies project for years, and last year they received a final approval on a revised plan (at least their second).  Now in August they will be back at the Deptford Planning Board meeting to ask for approval on another revision.  In 2018 the approval was for the movie theater and a separate restaurant building, and the notice this time around only adds “with substantial traffic improvements including traffic light and roadway together with any and all waiters and variances”.

The project is located on Clements Bridge Road in Deptford, across from Edge Fitness (Pathmark).  The larger property actually has three projects slated for it, a new Super Wawa down at the traffic light corner, an Inspira medical building somewhat in the center, and on the right side the Deptford Movies project with at least one other retail building.

It does state the movie theater will be 39,000 sq ft and the restaurant will be 9,200.  If the restaurant takes the fill size of the building (at 9,200) that would be a fairly large restaurant.  Consider that the average size of a McDonald’s is 4,000.. this would be more than twice the size.

We have no idea what the restaurant will be, but the fact they they are coming back for more adjustments makes me speculate that they have a restaurant in agreement and they are making adjustments to suit their specific needs.

The meeting is Aug 7, 2019 at 6pm at the Deptford Municipal Building.  42Freeway will be there.

Regarding the delays on the Clements Bridge Road projects, there are a lot of approvals needed for a project like this and a sewer line needs to be installed.  I also saw that the NJDEP had to approve the Wawa plans as there were some wetland concerns. The NJDEP approval appears to have been given in May of this year.

May 1, 2018:  Deptford Movies Project to Appear at May Planning Board Meeting.