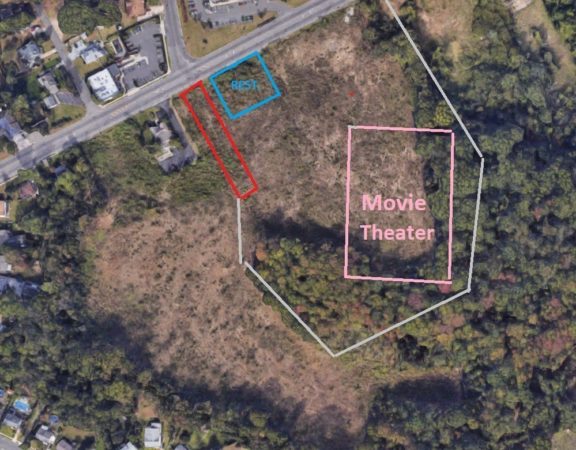 I attended the Deptford Planning Board meeting Wednesday Aug 7, 2019 where the two highlights of the night focused on the Clements Bridge Road projects; the Wawa Developer requesting an extension, and the Deptford Movie project asking for a small variance ahead of development.

Up first was a request for an extension of the Wawa project approval.  What should have been a quick process turned into a longer discussion among planning board members because…. well mainly, no one from Wawa or the Developer showed up to answer questions.

And their request for an extension seemed to be past the deadline.

And they listed a reason for an extension but sited the wrong ordinance.

And one of the key reasons for an extension was “a delay with County planning board approval”, but Deptford Planning members found no evidence of that.

And the Wawa property has not been subdivided from the larger Inspira project.

But again, no one from the developer or Wawa showed up to address any of these items.

So the planning board members spent some time talking through the best course of action.  It’s clear that no one wants to shut down the Wawa project and the town wants to be fair.. so they elected to postpone a decision until the September meeting, at which time the Developer and/or Wawa will need to be at the meeting to clarify the extension request and other project details.

I’m not attacking Wawa or their developer… The above is a true and accurate depiction of what went on for 15 minutes in the Planning Board meeting as everyone tried to piece together what was being asked of the Planning Board and how they should proceed, without any developer representatives available.  (Oh and definitely not a knock on the Deptford Planning Board team.. it was actually very good that the took the request so seriously, and wanted to be clear on the next steps to take)

Wawa Developer Controls the Sewer Line, and possibly the fate of all three projects

Many people have asked me about the long delays with any development activity on the large set of Clements Bridge Properties.  Years of talk, yet little action.  It seemed with the Inspira project and Wawa coming to light, we would soon see movement…  and still nothing has happened.

So let’s get this out of the way first… no, there are no environmental issues on the property as some rumors going around town say.  Mayor Medany quickly and confidently said there are no concerns (I had a chance to speak with him after the meeting).

One area of delay is, there are a ton of of approvals needed for a project like this… the town, the MUA, the county, the county MUA, the NJDEP.. and that takes time.  A lot of time.

Another delay is, the need for adequate sewage handling on that side of Clements Bridge Road, for several large “people-centric” businesses.

The Deptford Movies project has been kicking around the longest and they originally were going to have to put in a sewage pumping station.  And then Inspira and Wawa showed up as new next door neighbors.

So Wawa is to take the corner down by Lowes (across from TD Bank) and the Inspira building would be next to them (Wawa, Inspira, then Movies).  Well the Wawa plan for handling sewage is to run a large sewer line under Clements Bridge Road, connecting to the sewer lines on other side where the existing shopping center is.  This sewer line originally would only support Wawa and Inspira.

Well somewhere along the way the Deptford Movies folk connected with them, and offered to jump in on the sewer line deal… presumably kicking in a portion of the cost.  It’s a better solution for Deptford Movies, and it would seem to be more cost effective with all three projects sharing the cost.

So from commentary in the meeting tonight (and after), it seems that with Wawa positioned at the corner, it is the Wawa developer who is taking on the project to build the sewer line which is to be used by all three projects.

And if Wawa delays on their project, then it can impact the other two large projects.

So remember…  Wawa or its developer didn’t bother to show up for their extension, nor file the request within the proper time frame.

And let’s be honest, almost every Super Wawa project takes years.  Many years.  This Clements Bridge Road Wawa has been in discussions for 8 years!

So it makes me wonder about “when are they really going to build that sewer line”?

That being said, the Deptford Movies folks openly stated in their planning board discussion that they would go back to their original sewage pump plan if they have to.

I could not attend last year’s planning board meeting for the Deptford Movies project, so this week was the first time I saw the layout and plans.  The project’s attorney spoke first and he took the time to give the whole history of the project, and an engineer also spoke to discuss details of the plan.

The image at the top of the post is obviously my own take on the site diagrams presented at the meeting and are in no way accurate, but give an accurate sense of the placement.

So the key elements of the plan are:

As I mentioned the Attorney gave a nice historic rundown of the evolution of this project… all summarized above.

I had a chance to speak with the developer and his son after the meeting, and they said this will be the most state of the art theater in the region.  They are putting a lot of focus on providing the best and fastest experience for movie theater patrons.  Fastest… meaning they are implementing ideas at the concession stands to speed up the time it takes to get snacks!   Ideas include a cafeteria style line and an express self-serve popcorn area!

They also will have the latest state-0f-the art projections systems, and even a 20 seat private screening room which can be rented for parties and meetings.  Visitors in the screening room will have full control over the movie to pause it when needed.

Planning Board and Public Comments

Dear Wawa.  I love you.  I don’t mean to pick on you, but honestly.. you have a lot of “things in the air” regarding new store development, and the overall process takes a long time.  A really long time.  So I make some tougher comments in this post because honestly, I am not sure how anyone can put a timeline on when things really start rolling with this Deptford project.

The added twist is, it’s awesome that your development project is going to take the lead and help out the other projects… but it really would be great if you could get things moving, or at least give everyone a status on where you are with your Clements Bridge Road project… so they can decide to wait for the sewer line or move on.

Interestingly, the CEO of Wawa Chris Gheysens is a local guy having lived for many years in Washington Township, not too far from me in the Five Points area.  Chris, how about doing your old (extended) neighborhood “a solid” and push this thing along?!   And while you’re at it, we really could use a new Super Wawa in your old stomping grounds around Five Points.  I know you guys are looking at it as my local Hurfville Rd Wawa isn’t getting any remodeling love.. (which indicates you’d rather build new).  So Chris, let’s make that happen too!

In fact, why not stop over my house some day. I’ll pour ya a cold beer at the tiki bar, maybe play some tennis, and we can talk about Wawa’s plans for South Jersey!

For more information on the projects: