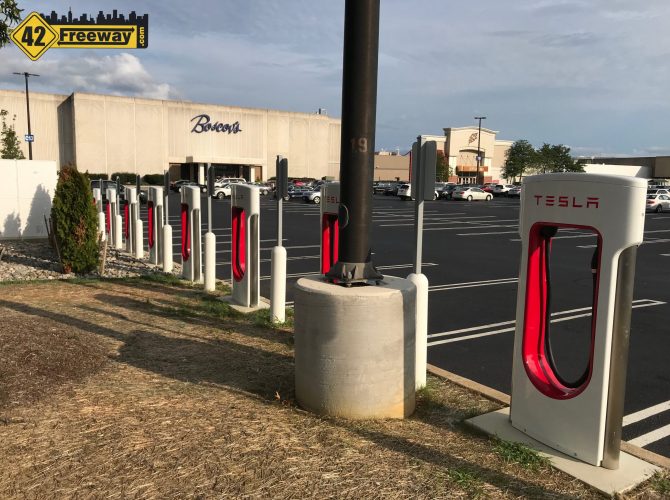 It’s taken over 2 years since we first reported it, but the Tesla Superchargers located in the Deptford Mall parking lot on the Clements Bridge Road side (Red Robin/Boscov’s), are finally operational.  There are 12 chargers in total, capable of 150kw each.  Tesla Superchargers will only work for Tesla cars.

We reported on this back in April 2018 when they appeared at the Deptford Planning Board meeting.  At the time, Tesla hoped the process would move fast and they would have them operational before the end of 2018.   Members of the Tesla Motor Club forum have confirmed they are running, and the Tesla official location site no longer lists as “coming soon”.

As mentioned, Tesla Car SuperChargers are only for Tesla cars, and use higher voltages to charge the cars very fast.  The goal of the superchargers  (as well as the car’s internal charging systems), is to build a network of chargers around the country that will allow Tesla drivers to not only recharge their cars, but to do it very fast… and reduce “range anxiety” so drivers can go anywhere and not worry about charging their cars.   Placing chargers in areas such as the Deptford Mall gives owners convenient access to charging, as well as things to do while they wait the short amount of time for the cars to recharge.

The Deptford Mall of course has several restaurants, food court, and the soon to open Round One arcade restaraunt!

Early models of Tesla cars (Model S and X) included free lifetime charging at Tesla superchargers, but that was later stopped.  Most Tesla car owners are paying for usage of the superchargers

Red Mexican Grill is coming to Gloucester Township on Lower Landing Road, in the building which was previously Amanda's Bar None.   The new owners are preparing the building to meet their restaurant needs and are hoping for a late summer opening.  At this time they will be opening as a BYOB restaurant, but hope to down the road offer a full bar. Like their Facebook, page to keep up with latest news on this just announced eatery!!

Michaels Crafts will be taking over the closed AC Moore location in Washington Township! The banner hanging on the front of the building makes it very clear.

A new Xfinity Retail store has opened in the Deptford Mall, located next to the new Dick's Sporting Goods in the remodeled Sears segment.  A new twist for the mall, the Xfinity store is only accessible from the outside of the mall.
This Post Has One Comment