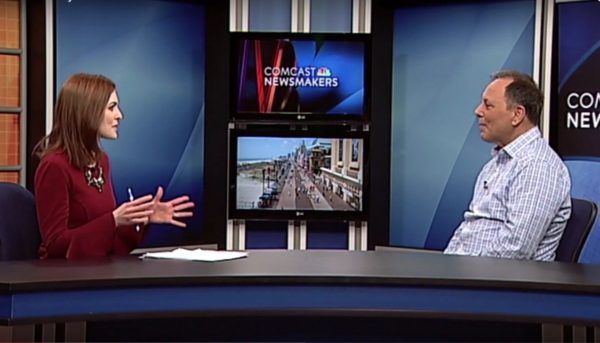 Deptford Township Mayor Paul Medany is a regular contributor to Comcast’s Newsmakers YouTube Channel.  This week in an interview with host Jill Horner (a former Miss New Jersey from Gloucester Township), Mayor Medany confirmed some of the rumors regarding a large entertainment facility to take a level of the recently closed Sears in Deptford Mall.

An entertainment company is coming to the mall

In the short 3 minute interview, Medany mentions the Dick Sporting Goods is moving over (story broke by 42Freeway), and then adds

One of those two (Sears) spaces will be entertainment

Medany and host Horner have done dozens of videos together for the DeptfordNJVideos series and it’s clear they have a very friendly style… but in the short interview Jill politely tries multiple times to get additional information on the unnamed tenant, and the longer term plans for the mall.  Medany adds

I think that’s what malls have to do now, its not just strictly retail. We have to build entertainment around it. We have shopping, dining, entertainment, that bring something where folks can do all these things… have options

You have to bring folks out for different reasons, but at the end of the day people are going to want to shop.

To be clear, we aren’t certain at this time.

With all of this being said, it still doesn’t clarify “what” is coming to the mall.

Well I’ve been hearing all the rumors.   The first obvious choice was Dave and Busters, which was strongly rumored to be the target years ago.  Those plans for D&B have moved to the Gloucester (Township) Premium Outlets just a few miles away.

One early challenge previously for the mall was simply Deptford’s own success… in that it is difficult to get an available liquor license in Deptford.  There is only one not in use (originally tied to the Route 47 Benderson property), and I can only speculate that when D&B was knocking on Deptford’s door the lack of liquor license availability was a key problem.

That problem was solved when that unused Benderson/Wainco license was sold… to be used at the Mall for a future tenant.  Unfortunately, Dave and Busters has moved on.

Round One is not really known in this area prior to today… and I’ll be honest that my first hearing of the company was a few months ago when another mall retailer asked me about them “hey did ya hear anything about Round One coming to the mall?”!   They were confident enough in what they heard that I emailed the Mayor a couple months ago to see if he was aware, and he could not offer details.

What we do know is, Round One is a Japan based arcade company in the same category of Dave and Busters.  The distinctive difference is they also feature bowling alley lanes, karaoke rooms, and lots of game claws!  Looking at video of recently opened US stores, there definitely is more of a whimsical Japanese arcade style to the venue.  They include bar and arcade style food in the offerings, and their marketing materials say they are targeting mall locations.

So I said they are not well known in our area (they do have a location in Exton PA)… well right across the Ben Franklin Bridge the Gallery Mall is being redeveloped into the Fashion District Philadelphia and just today Philly.com broke the story that Round One will be opening there!  The space allocated for the Philly location is 60,000 sq feet, which is very large and about the same size as one level of the Sears store.   Oh, and guess who is part owner in the newly redesigned Fashion District?… Deptford Mall owner Macerich!

One last coincidence, the most recent to open Round One location opened last Saturday in Southridge Mall (Wisconsin).   The location is in a former Sears store!  And guess what is in the other level of the re-purposed Sears?  A Dick’s Sporting Goods… just like Deptford!

But would they open a location so close to the just announced Center City location?

So this one is new to me today!  I mentioned to a coworker in my day job about this post, and he immediately said “What about Main Event?”.   So my coworker lives in Delaware and he tells me there is a location in Newark.   So at first I assume it must be a local one-off company, but was surprised to find out they are also a growing national chain of arcade entertainment places!

Like Round One, they offer Bowling as a core add-on to the arcade games.  But instead of karaoke they offer Laser Tag and Gravity Rope (based on the Newark DE details).

So in summary…  Mayor Medany confirms a large entertainment company is coming to the Deptford Mall.   There are rumors in town of an arcade based company (similar to Dave and Busters) coming to the Mall, a mall retailer asked me about Round One, and just today Philly.com announced Round One will be opening at the remodeled Gallery shopping mall!   Oh… and the mall has a recently acquired liquor license available for a new tenant.

But is Round One already knocked out… in round one?  I mean, if they are building a location in Center City would they also build in Deptford?  In reality the Urban vs Suburban shopping experience is very different, so while close they will attract different shoppers?

Still more info to be discovered!

And yes the battle is on…   Deptford Mall vs Gloucester Premium Outlets!  One added interesting twist is considering that the Sears building remodel would mostly entail an internal build-out, they should be able to open faster than a Dave and Busters fully new building construction in Gloucester Township.  But on the other hand, the entire $90 Million Outlet Mall was built and opened in just 12 months… so who knows!  We’ll have to sit back and see how this plays out!

See the short Mall interview below!