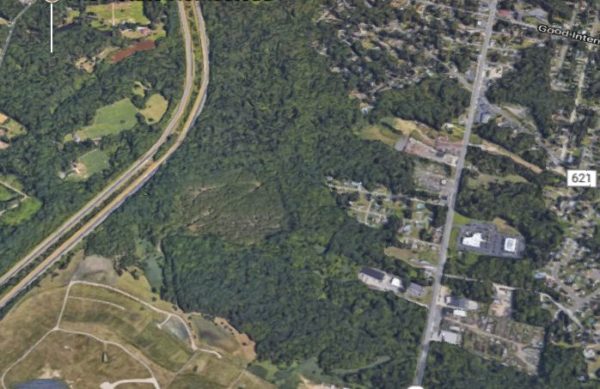 So let me be very clear.  The buyer has not said what his plans are for the property.    This post explains what the property was previously approved for (mixed use retail, office, residential), and what the new buyer owns in Cincinnati Ohio (a large sports entertainment center).  None of this information is a guarantee to what will be done at the recently purchased Deptford property.  Get a comfy chair cause this post is a longer one.

It was a simple comment made at a recent town meeting I attended “and the Birchcrest property sold”.   If anyone else had sat in on the Deptford planning meeting last month they probably wouldn’t have noticed it, but to me it was the most important thing said during the hour long meeting.   I was familiar with Birchcrest… partially because I write this blog and you’d be amazed how much time I spend googling properties, but mainly because it is located very close to my Deptford house and when we first moved in, there was a sign on Hurfville Road saying “For Sale 140 Acres Mixed Use.  240 Units Approved”.  Seeing that so close to my house you know I’d have to research it… and I figured out three years ago this was the Birchcrest Development, located at the northern foot of Kinsley landfill along Rt 55, but with main access to Hurffville Road, close to Pennsylvania.

Birchcrest was approved many years ago as a mixed use development, to include Retail, Office and Residential properties… and then nothing happened.  Back around 2007 there were some legal issues between the owners of the property and Deptford, and 2007 was also the start of the real estate market crash… so they could’ve been factors.

An old real estate listing provides some details on what the plans were years ago.

Well first, the location.  To put it into real-world terms, its primarily landlocked by other road-facing properties, and its main entrance would be off of Hurfville Road, on the other side of Pennsylvannia Rd and down a bit.  If you are driving down Hurffville towards 5-points, you pass the well known location of South Jersey Federal Credit, then Pennsylvania Ave on on the left, the “In Stitches” store is on the right… and, well just past the store (and Pennsylvania) on the right is a small little office park of three buildings going back.  The one on Hurffville is a Corvette repair place I believe.  So, the way I read the documents is that road, and a small portion of property across the street from that access road, are the main entrance points into the large 100+ acre property.

For 100+ acres, that really is the only logical entrance point.  But there is one other location.  Over in the very residential area of SouthSide Avenue (off of County House/Good Intent and close to Wawa) the property included an easement road to Southside, cut right between existing houses.   In the previously approved plans, this part of the property was targeted for residential construction.

If you are familiar with the two landmarks I just gave (the entrances on Hurfville and Southside) you start to get an idea of how large this property is.

The Birchcrest property is located north of the Kinsley landfill, and I believe it was this property that started the entire effort to close the landfill.   Back in the 80s, the landfill owners wanted to get approval to enlarge the landfill, and this caught the attention of some area residents… who fought back and not only stopped the expansion, but it lead to the landfill being closed.

In the map diagram above (from a previous property listing), you can see Hurfville Road on the bottom (and its access point), Route 55 at top, and on the right edge the little line denoting the access road to Soutside Ave.

The map below is another “take” on representing the previously approved project.

So let me be very clear.  The buyer has not said what his plans are for the property.   I called his office “He’s out for a month, send an email”.  I emailed twice.  And I then found his Facebook page and sent him a message.  So far I have not had a response, even when I mentioned I was posting this story.  He doesn’t need to reply if he doesn’t want to, I just wanted readers to know I gave it a try.

So the property purchase closed earlier in 2017 for the bargain price of $400,000.  100+ acres in the heart of retail mecca is a great price, but of course… it is next to a closed landfill.  The real estate documents don’t list the total acreage, but in looking at the Block and Lots, compared to the tax maps, its clear that this represents the core Birchcrest property as described in the earlier parts of this post.

The buyer is Greg Martini from Cincinnati Ohio, who in internet searches is an CFA with an investment background… but most notably, he is the owner of a large indoor Sports and Entertainment facility in Cinncinnati, called Sports Plus Ohio.

How did we make the connection?  Well the address listed in the real estate contracts lists the address for the Sports Plus facility… as well as Mr Martini’s name which connects to the sports facility.

Sports Plus is a large entertainment complex featuring an Ice Skating Rink, Indoor courts and other attractions.  The Google maps overhead view shows a miniature golf course.   Also promoted on the web site are a trampoline park, indoor zip line and a bar and grill!

42Freeway also reached out to Deptford Mayor Medany who simply replied “No one has reached out to us in an official capacity”.  I did not push for any details.

Considering the low purchase price of $400,000 its not unreasonable to think nothing will happen with the property for a long time!  So again… there is nothing confirmed regarding what the plans are for the recently purchased Deptford property, but it was previously approved for a mixed use development, and the new buyer has experience in sports oriented entertainment.

Many feel that Deptford is already too built-up, but this is just one of several larger tracts of land that have been targeted in the past for development, and over the next few weeks I will be highlighting those properties also.

Note to other area media venues, if you choose to run with this story please cite 42Freeway.com as the initial source for the story.  No one else has this information and the first time the dots have been connected, is right now.