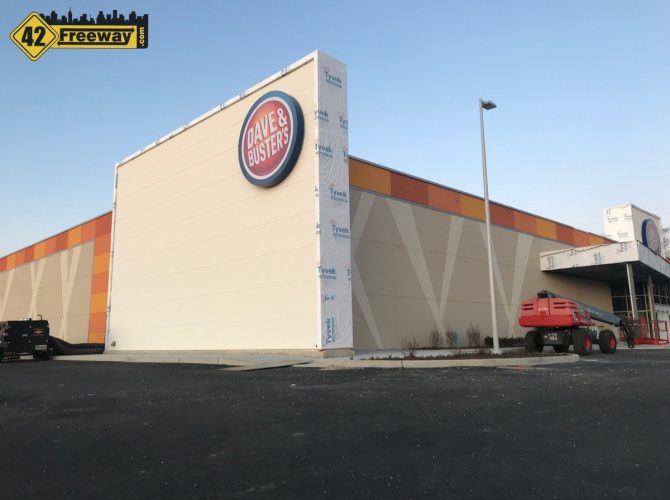 May 11th is the official opening date for the new Dave & Buster’s entertainment restaurant rising in the Gloucester (Township) Premium Outlets complex on the 42 Freeway!  This information comes directly to 42Freeway.com from a Dave & Buster’s Corporate Senior Manager.

Dave & Buster’s was originally planning on an April opening and and one time was thinking they’d open earlier, but a few (unknown to me) construction delays have pushed the opening back a few short weeks into May.  We visited the location today and core building construction has been done a long time, the signage is up and painting done… but interior work can be extensive for a project like this.  Just think of the electricity needs to power all of those games!

Jobs have been posted at their career site since early January.  Go to this link and search on Gloucester, NJ

42Freeway has covered this story from the beginning and we broke the story back in May 2018, and we were there at the Planning Board meeting when the project was approved.

If somehow you aren’t familiar with Dave & Buster’s, despite one of their largest “Flagship” locations being located in Philadelphia on the Delaware river since 1994… Dave & Buster’s is a restaurant and bar which extensively features entertainment options centered around a large arcade area and typically a billiard area.  But this is not the arcade we remember from the 90s.  Yes D&B has the latest seemingly traditional games but they really push the envelope in having the latest gaming technology options both in arcade games and “win tickets for prizes” games.

It’s absolutely “fun for everyone” but D&B presents it all in a way that makes everyone comfortable. The bar will be just as comfortable to a group of guys watching they World Series as it is when they come back with their families to have dinner and play arcade games.

If you want to read more about Dave & Busters and in particular the Gloucester Township location here are a couple of my 5? posts:

Dave and Buster’s Coming to Gloucester (Township) Premium Outlets
May 11, 2018:  This is when we uncover the D&B is coming story and give details on the industry.

Dave and Buster’s Approved For Gloucester Township – Images and Details
Aug 30, 2018: It was me and 2 or 3 other people sitting in on the meeting… and honestly the others where there for a residential development presentation which was postponed.  Includes interior renderings of the GT location!

So yes, the Deptford Mall is also adding an Entertainment/Restaurant… their’s is called Round One.  We’ve also posted on that extensively and guess what?  Yeah we were the first to bring that story to the public also!  Anyway more on Round One to come in another post.

I am a huge fan of Dave & Buster’s and I’ve been playing games since the first arcade games.  I remember playing the first Pong in a small bar in Brooklawn with my father, I played all the games at Westbrook Bowling Alley, Weber’s Wave, every 7-11 and pizza shop… and even to this day, I regularly play Call Of Duty, Age of Empires, and… um… uh… MineCraft!   ha.  So I plan on being a regular visitor to Dave & Buster’s!

42Freeway.com gives a quick and exclusive look at the the upcoming 63,000 square foot pediatric medical facility coming to Deptford Twp.

Don Pablos Deptford is the Last One in the ENTIRE CHAIN

At one time they had 120 restaurants, with several in the Delaware Valley. But as of last Thanksgiving, Deptford is the absolute last location of the Don Pablo's Tex Mex chain!

GameStop Wasghington Township Closes Ahead of Chipotle and First Watch. No Timeline on New Eateries

The GameStop Store located in the "Acme" Shopping Center on Egg Harbor Road (Washington Township) closed last week, ahead of the the development of Chipotle and First Watch Daytime Cafe.  GameStop was located in the stand alone building at the front center of the parking lot. At this time we could not identify any timeline for the construction or opening of Chipotle and First Watch.
This Post Has 3 Comments