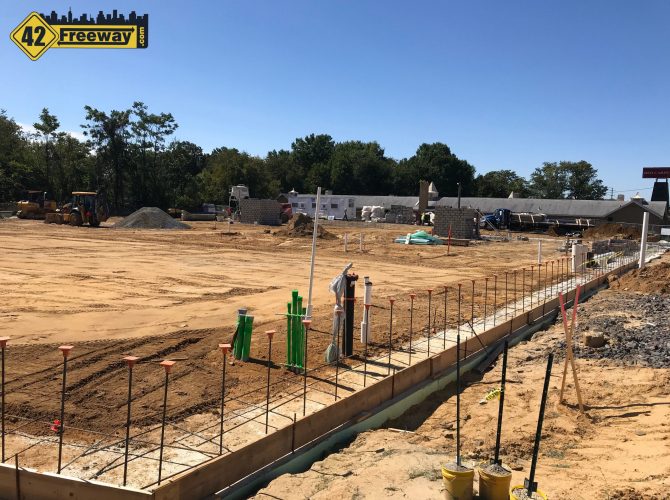 The well known Pennant / Dick Lee’s building in Bellmawr was demolished earlier this year to make way for a large self-storage facility.  Construction is now under way on the new three story indoor storage building.

42Freeway readers… i’ve done ya wrong, as I haven’t posted on this project much and wish I had when it was going to the Bellmawr and Brooklawn Planning/Zoning Boards for approval!  South Jersey Observer has been at the front of this story as it evolved, and at times I shared their posts to the 42Freeway Facebook page.  I link all the relevant articles at the bottom.

A Fresh Start Was Needed

A step back… absolutely the abandoned Pennant property had become a blight on the neighborhood since it closed 9 years ago.  The short brick wall around the property that I climbed over 100s of times as a kid (before Dick Lee put in an opening at the back corner to Romano Ave) had tipped-over into piles of broken brick strewn across the sidewalk.  The sign and landscaping was a mess.  The building was falling apart, and a friend in the bar industry who toured the building told me it had significant interior mold damage.

It’s amazing how fast a building that sits for just a few years can deteriorate, and it had been 9 years since the last Pennant show.

So yes, as sad as reality is… it’s best that the Pennant building is gone.

I’ve read the posts at area news site South Jersey Observer but I guess I didn’t quite pay enough attention.  But a few weeks ago as I was standing at the corner of Romano and Kings Highway and see a foundation going in about 8 feet from the sidewalk… it just seemed, well… close.

“That can’t be the building wall, right? “, I say to myself.  “That’s really close to the sidewalk.  That has to be a small property wall like the Pennant had previously?”…   hmmm

So yes, full disclosure, this was my neighborhood growing up.  In one of the pics I took 3 weeks ago, you can actually see my childhood home that my family still owns.  So I get that my perspective on this is skewed.

I come home and check South Jersey Observer “I think Anne had the site plan”, I say to myself.  And sure enough, this new building will basically fill the entire Dick Lee’s/Pennant lot.  There seems to be an 8-10 ft buffer around the edge, and enough space cut out of the front corner closest to Romano, for about 15 cars to park.

And then the big kicker is.. it’s three stories tall.

The siteplan is at the bottom of the article.  The brown/tan coloring in the drawing is not dirt.  That is the building.

So to be clear… that is the originally submitted site plan.  There may have been updates to it as part of the approval process. I am working on that.

The parking lot cut-out is positioned at the Romano Ave side, which helps reduce the “big wall” feel, and gives cars exiting onto Kings Highway better visibility to oncoming traffic.

There are definite similarities to another Bellmawr indoor storage facility.  The Extra Space Storage property on the Black Horse Pike in what was previously Bellmawr Furniture, has a similar setup.  Tall building filling the entire property, with a small carve-out for parking and trash.  And it sits on a major road.

So the Pennant location storage will be similar, but maybe taller.  The side roads next to the existing Black Horse Pike storage building are a full 5ft wider than the Pennant’s Romano Ave side street, and that extra 5 ft makes a difference.

Of course the Bellmawr Furniture building was built many decades ago and the use as a storage facility was a conversion… whereas the Pennant location storage facility is all newly approved.

Most don’t realize this, but the dividing line for the Pennant property angles through the middle… maybe 45% is Brooklawn, and 55% is Bellmawr.  The Pennant was always identified as Bellmawr because the building was positioned so that it (and the alcohol sales) were all in Bellmawr, but because a big chunk of the property sits in Brooklawn, they had to approve this project also.

Surrounding the other property edges are the highway, the backwall of a motel, and the property which I remember as the Melrose community pool.

So we’re really talking about the one side street, Romano Ave.

So one of the problems I see here is… when I was a kid all of those duplexes in the Crescent Park neighborhood were owned by families who lived downstairs and rented the upstairs apartments.  My parents basically lived for free in Bellmawr as the rent for the apartment they owned upstairs was higher than the whole house’s mortgage and basic utilities.

But over the years investors learned those duplexes also make for awesome investment properties, so the number of “owners who live in the lower level” has dwindled, and it seems there just aren’t enough owner-residents left to comment/complain?  Was there really even a need?

I wanted to see if anyone commented.

The Bellmawr town website maintains agendas and meeting minutes, but the minutes from the September 2019 meeting are not online yet.  The Brooklawn website offers no archive of Planning/Zoning Agendas or meeting minutes, and the last Council meeting update was 2017.

We reached out to Bellmawr Mayor Chuck Sauter:

“I believe this is a good tax ratable for the town and better than the eyesore we have seen for years”.

He also directed me to contact the Borough Solicitor for the Zoning Board to get additional answers on the site, which I haven’t done.

It seems that the earlier reported timelines are holding up even through Covid.  We can expect the new Self Storage facility to be opened in the first half of 2021.

Overall I am very happy that the property is being redeveloped.  I am happy for Bellmawr and Brooklawn to get a new and significant commercial tax ratable.   An eyesore is gone in the neighborhood.

And look I’ll be honest with you, I loved going to the Pennant and Dick Lee’s when I was younger, but when they were open it was horrible for the neighborhood!  With limited parking the local streets for blocks would fill up with cars, and as things winded down at 2am on weekend nights or “White Trash Wednesday”, there were significant issues with drunken patrons returning to their cars parked very close to the houses.  So yes these area all wins for the neighborhood.

But this building is big, although I am not sure if it matters, despite my rambling here.

It’s one side street, and mostly sits on the major Rt 130 highway… plus gone forever in the neighborhood are 2am antics of drunken drivers side-swipping cars on the narrow streets.

So the positives outweigh the negatives in my mind. But damn its big.