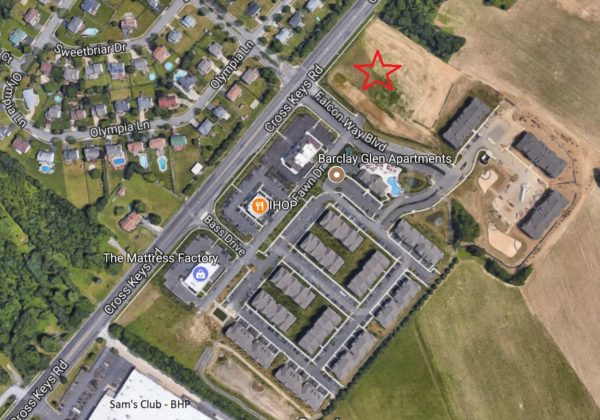 A new construction bar and restaurant, Cinder Bar, is coming to Cross Keys Road in Williamstown New Jersey, almost next to the recently built IHOP and very close to the Black Horse Pike and Sam’s Club.  I first heard of this just a few weeks ago from a friend who has a friend involved in the Monroe (Williamstown) Township Government.  I had seen a liquor license recently being transferred from another recently closed bar, but I couldn’t connect it to a new bar project.  So not wanting to post without confirmation, I waited till I noticed that in the July Council Meeting Minutes, the Mayor of Monroe confirmed Cinder Bar was coming, and they also reference the location (mostly).

Dining for Dollars – Competition is getting tough

As I mentioned, the location is on Cross Keys Road near IHOP.  I believe the property sits in front of the Barclay Glen apartments.  Restaurant dollar competition continues to get tougher in this area, as Cinder Bar will be very close to Rack’s and the House of Brews on the Black Horse Pike, and just down the road from the Tilted Kilt… and of course on the other side of the AC Expressway are several more bar eateries such as Buffalo Wild Wings, Plaza Azteca and Bertucci’s.

This will be the second location for Cinder Bar!  The first is also a recently new construction restaurant located in a new development in East Greenwich, off of 295.  Coincidentally, I was just there last week to do “research” on Cinder Bar, the new brewery and yet another Royal Farms.  I’ll have these posts later!   Anyway, Cinder Bar is also then part of a larger organization which owns the two Village Pub locations in Swedesboro and Washington Township (5 Points).    (To be clear, I am not 100% certain on the ownership situation of this new Cinder Bar location.. but I do know when the East Greenwich location opened it was clearly indicated as part of the Village Pub restaurant group).

Now I really have to get the East Greenwich Cinder Bar review written this week… but short story is, its a higher end looking craft beer bar (and more), featuring entrees from a wood burning oven.  The décor fits the rustic wood theme, and my wife and I were impressed with their unique twist on food.

The commercial and economic boom is really landing squarely in the Cross Keys Road area of 42 Freeway with the recent articles on Royal Farms at Johnson and also the White Horse Pike, an Aldi Supermarket, a Taco Bell, Republic Bank, Hobby Lobby and more!

Oh and one last thing.. across from the Tilted Kilt has been a sign for several years advertising an approved bar and liquor license for an open lot, which was has been looking for a buyer/developer… so who knows what that brings some day?