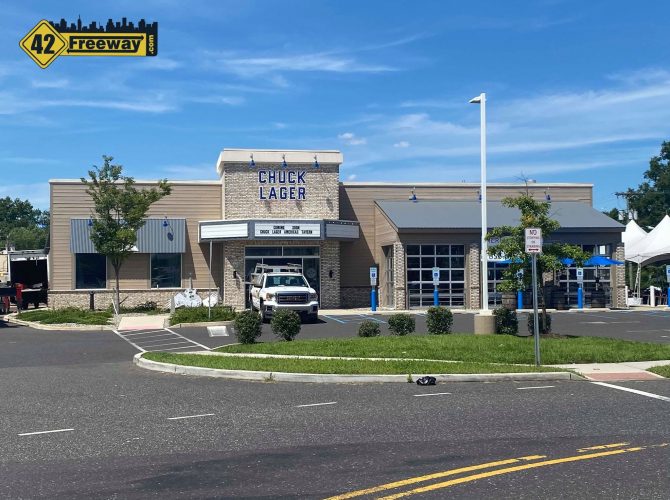 Chuck Lager America’s Tavern is opening in Barrington NJ this Monday August 25… for outdoor dining initially of course!   They are taking over the Wild Wing Cafe location, which had a 3 yr run on the White Horse Pike.   Chuck Lager is a newer restaurant concept from Celebrity Chef Fabio Viviani, who is quickly building a restaurant empire across several brands.

The big change for Barrington… this is a full restaurant menu targeting a better food experience in the multi-unit food category.  All food items are scratch made, they offer a vast selection of craft bourbons and beers, and decadent desserts!

Chef Fabio made a national presence on Bravo’s Top Chef show, which has catapulted him into owning 3 DOZEN restaurants under a variety of brands. He is regularly featured in media around the country such as USA Today, and Crain’s Chicago Business.  But the full story is, Chuck Lager is a partnership of Chef Fabio and brothers Michael and Craig Colby.  The Colby’s owned the Wild Wing franchise for Barrington, and it seems Chuck Lager is their effort to create their own signature eatery.  Their Delaware location was previously converted to a Chuck Lagers.  The team is also building out locations of Dixie Chix Southern Kissed Chicken.

The Chuck Lagers Barrington Faceboook page has been online since earlier in the year, and they have been regularly sharing images of their food items, which look amazing!  Recent dishes include; Asiago Gnocchi, Fig and Prosciutto Flatbread, Chicken Parmesan, French Onion Burger, Carnitas Nachos.. and amazing dessert.   Go like their page.. they sit at 511 likes at the time of publishing!

I was a fan of the Wild Wing Cafe but honestly I was more impressed with the building and the location, and felt it could be used better.  While the Wild Wing Cafe did offer other entrees and delicious burgers, I feel that the “Wing” element of the name pigeon-holes them into a specific category to many consumers.   “But Grandmom doesn’t like wings”.   A related example, Pizzeria Uno’s realized this years ago when they rebranded as just Uno’s to take the focus off of being a place only for pizza (and honestly most of my recent meals there weren’t pizza!)

So in the case of the beautiful Barrington building, the Colby’s chose to create their own full dining experience with Chuck Lager that even Grandmom would be comfortable at.  While I haven’t visited it yet, honestly Chuck Lager seems to me it’s in a similar category as the Cinder Bar Crosskeys restaurant, which has been packed from the moment they opened.

For a deeper dive into what the new restaurant is bringing to Camden County, check out the Town Square Live article regarding last year’s Delaware opening.

The location of Chuck Lager Restaurant is on the White Horse Pike, next to the newer Super Wawa and across from Time Out Sports Bar (close to Home Depot)