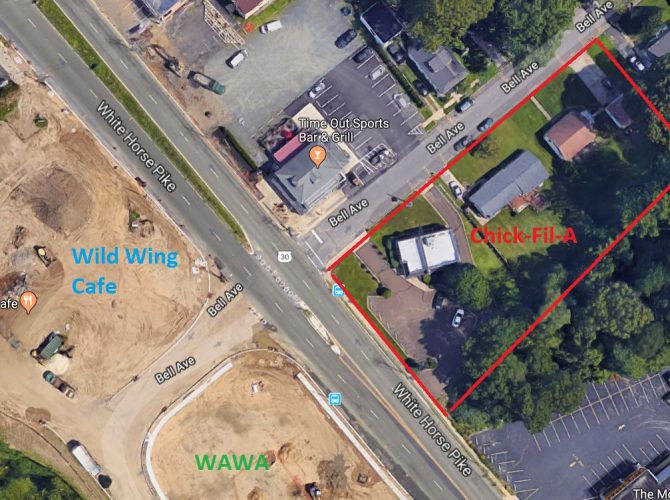 Since this past summer, several Barrington NJ monthly newsletters as well as Council meeting minutes, have confidentially referenced the upcoming development of a Chick-Fil-A restaurant on the White Horse Pike.   (September Meeting Minutes: PDF)

In the most recent comments we could find, the town expected the developers to present to the planning board this November, but 42Freeway has not been able to confirm if that has happened yet.

The exact location is directly ACROSS from the newer Super Wawa, on the corner which currently contains a law office.  Many don’t realize that part of the White Horse Pike is Barrington.   The restaurant property is expected to include the law office property, as well as the two homes which sit behind the law office along Bell ave.

Another distinctive landmark is the Time Out sports and music bar, which sits across the (Bell Ave) street.

With the upcoming addition of Chick-Fil-A, this section of the White Horse Pike will feature several chicken options.

Council meeting minutes clearly state that the new Chik-Fil-A project will take advantage of a PILOT tax program.  PILOT stands for “Payment in Lieu of Taxes”.  These programs do not necessarily mean less taxes for the business, but instead establish a negotiated direct payment to the town over a period of years.  The real difference is, because these are not traditional property taxes, none of the money goes to the school district.   In response to resident questions, it was explained that the county would get 5% of the money.

Both the Super Wawa and the Wild Wing Cafe utilized the PILOT program offered by Barrington.  It’s tough to argue with that success in turning around an underutilized area of a popular road.

There is another development currently under construction in front of the Home Depot, and we’ll have more info on that later this week.

The Sewell 5-Points McDonald's reopened after a weeks long complete remodel. More modern looking inside and out, they also offer touch screen ordering and payment as an option! Photo gallery in the article!

A new Republic Bank branch opens on Blackwood-Clementon Road on July 28th.  The location is at the site of a former Shell gas station, at a traffic light which also has the recently (surprisingly) closed Denny's.  Across the street construction has started on  a new Royal Farms convenience and gas store.

In what has become one of my most asked about happenings, yes... it is a Taco Bell being constructed in front of the Acme on Crosskeys Road in Gloucester Township
This Post Has 12 Comments