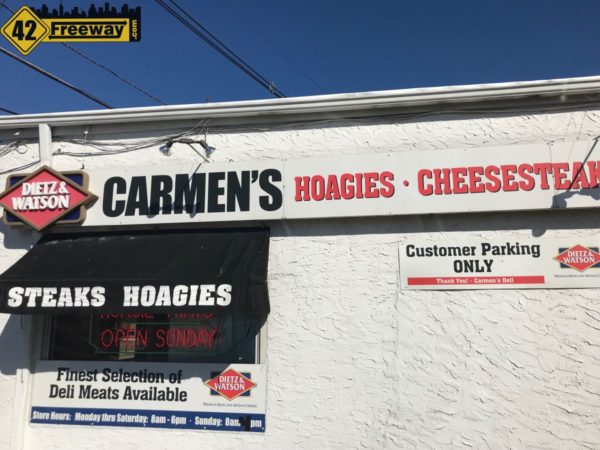 Carmen’s Deli in Bellmawr has long been known as a top hoagie place in South Jersey, and 10 years ago or so they added Cheesesteaks and other hot sandwiches to the menu.  It didn’t take long for Carmen’s to gain attention for their big and tasty cheesesteak sandwiches…

Food Network’s Big Daddy called Carmen’s Cheesesteaks “The best thing between bread” (check clip at bottom of article), and just today, NJ.Com’s Peter Genovese put Carmen’s on his list as “Best Cheesesteaks in New Jersey”.  All of New Jersey.  And I give Peter credit as he is a North Jersey guy, so if he can find this gem in our 42Freeway neck of the woods… shouldn’t we all try it?

So in honor of National Cheesesteak Day 2018, I visited the original Carmen’s location in Bellmawr.   I have never had one of their cheesesteaks.  I didn’t tell them who I was, or that I was planning on doing a video. What you see in the video is their regular $9.50 cheesesteak with “a little bit” of fried onions.

About 9 months ago a second Carmen’s location opened up in Haddon Heights, within the DelBuono’s Bread Bakery!  We posted on that back in August.  This came about because of a change in ownership at Carmen’s, which could see additional expansion.

So I don’t really do reviews other than to say when I really like things (like Guy Fiero in Diner’s, Drive-ins and Dives)..  but I will say I REALLY enjoyed this cheesesteak… perfect amount of cheese and onion, and this is very important… the cheese was melted all through the steak.   Absolutely nothing was lost with the new ownership taking over.

Carmen’s is not a late night eatery, and the Bellmawr location does not have seating.  Be aware of the hours.  from their menu:

Below is another in a my series of poorly planned, poorly filmed, and hard to hear “one take” videos!