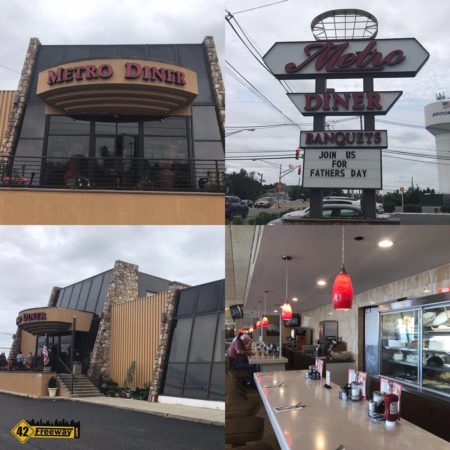 Employees have been telling customers the last week that the Metro Diner’s last days are here. We visited today and many employees solidly confirmed that Monday is the last day for the widely loved and famous restaurant. They will be closing earlier on Monday but that time is not determined.

We could not speak to the owners but a Manager did confirm simply “some time this upcoming week”. So that’s the only possible other scenario, but I’m confident Monday is the day.

The restaurant this Sunday morning was very full, with almost all of the tables in the multiple dining areas taken. 42Freeway spoke to a life-long customer who said she has been coming to Metro/Ponzios each month for a group luncheon, for years… and has known about this being the last week since last week, when she was told by her upset server.

As has been widely reported, Wawa has purchased the property to make way for a Super Wawa.

The “Convenience Store Wars” have escalated with the introduction of new competitors like Royal Farms, which is forcing Wawa to be very aggressive in spending larger sums of money to secure prime locations. The cost of buying a large restaurant like Metro, demolishing it, and then building… is no minor expense. Wawa is also close to finishing a Super Wawa in Mantua on the former site of Clancy’s Bar, and reported just last week Wawa is starting the process to take over Connie Mac’s bar location in Pennsauken (ugh, I missed that one)

Another reason for this aggressive move by Wawa is, new area competitor Royal Farms recently opened a Super Convenience Store in a prime location just 1/4 Mile up Rt 130, in the heart of an area which had several “regular” Wawa stores, including Bellmawr and Gloucester City.

For all of the details of what’s happening with the Brooklawn Metro Diner you should follow the South Jersey Observer who has been on top of this story from the beginning.