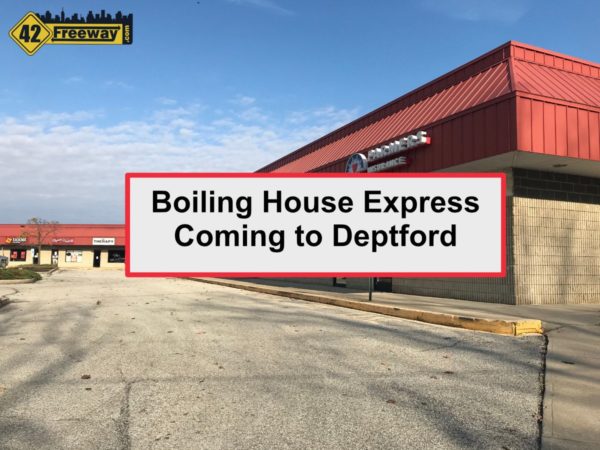 The location is on busy Hurffville Rd (Rt 41) across Deptford’s Forman Mills, in the small strip mall which also has Wendy’s in the parking lot.  We aren’t clear yet which of the storefronts will be Boiling House Express… we did stop there today (nothing was obvious) and we’ve sent a message to their Facebook page.

So it seems “seafood boil” places are the all-the-rage now, with several popping up around the Delaware Valley, but there seems to be something special about Cherry Hill’s The Boiling House.

On OpenTable. the Cherry Hill Boiling House has 659 reviews and a 4.5 star average rating.  That is CRAZY IMPRESSIVE!

It’s a safe assumption that the same high quality food and attention to detail carries over to their Deptford Express location.   The photos they are showing on the website look amazing!

So maybe you are just catching up and wondering what a seafood boil is…   well as mentioned above it’s clear it is the “hot new thing”, and we will be seeing more and more of them.

To be clear we aren’t sure of what the Deptford location’s menu is, but their Facebook photos offer some hints that the Route 41 location will feature a variety of shellfish, in a choice of preparations and sauces.

This is the classic “Seafood/Crab Boil” concept, where along with your choice of shellfish and sauce, they’ll include potatoes, corn, sausage and other incredients.

This style of preparation traces back to Louisiana/New Orleans, where crawfish, shrimp and other shell fish are a big part of the cuisine… oh and typically it’s spicy!

In the South Jersey area, competitor Crab Du Jour seems to be leading the expansion…. with locations scattered around including nearby Turnersville New Jersey, and a planned Cherry Hill location at the Famous Dave’s location (with full bar!).

Sicklerville Cross Keys Road is slated get a Perfect Crab location at the former Tony Luke’s.

The food was killer!

The food was excellent! We really enjoyed it!

This was our first experience there and it was beyond our expectations.

I loved it! Extra clean, very friendly staff! And the food was AMAZING!

The food is amazing along with the great customer service!